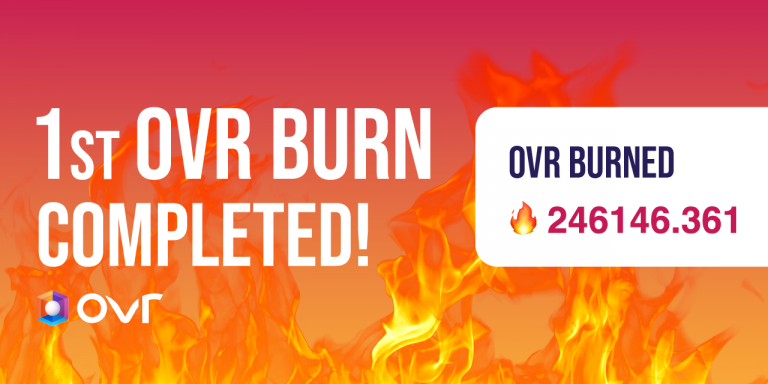 OVR launched its new Token Burning Program on 1 November to make its own tokens more rare and valuable. The results of this first month of November saw a total of 246 thousand OVR burned.

OVR’s updated token economics started on November 1, 2021, after the OVR team burned nearly 1 million of its tokens last May.

By the end of last month, the platform had collected a total of 615,365 OVR from its sales of OVRLand NFTs, excluding GAS costs.

As anticipated, the Token Burning Program foresees that 40% of the collected OVR are burned, while 10% is used to incentivize OVRLand sales with monthly draws among new OVRLand buyers using Chainlink VRF.

And indeed, for this month of November 2021, the total tokens burned amount to 246,146 OVR, while exactly 61,536 OVR have been dedicated to the OVRLand draw on Chainlink.

In general, the more OVRLands purchased on Chainlink, the higher the probability of winning the jackpot.

OVR and Its Updated Token Economics

In order to update its token economics, OVR has resorted to smart contract burning to make its own OVR token scarcer and more valuable.

To better understand the concept, it would be useful to lower the estimates for a moment, by deciding that out of the 1.6 trillion OVRLands available, only the 100 million OVRLands that correspond to the points of interest recorded on the Open Street Map are taken into account, each of which is assumed to be no larger than 1 OVRLand.

That being the case, if the cost of 1 OVRLand were $10 and the price of OVR were $1, the total sales of the 100 million OVRLands would generate 1 billion OVR. Of this:

The Next-Level AR Metaverse and the Map2Earn

Recently, OVR also announced the development of OVR Land Mapping. In essence, thanks to AI capability, OVR is generating a detailed 3D map of the physical world in a metaverse on another level, based on simple images taken from the smartphones of its users who have decided to participate in the Map-to-Earn.

In fact, OVR users who join the initiative become real OVRLand Scanners and can earn OVR tokens simply by scanning physical locations with the smartphone in their pocket.

This is a new way of monetizing, similar to the play-to-earn that Decentralized Finance or DeFi games are offering their users.

OVR Map2Earn is a revolutionary mapping system technology that overcomes the accuracy limits of GPS, resulting in newly scanned OVRLands having a location accuracy of up to 10cm.