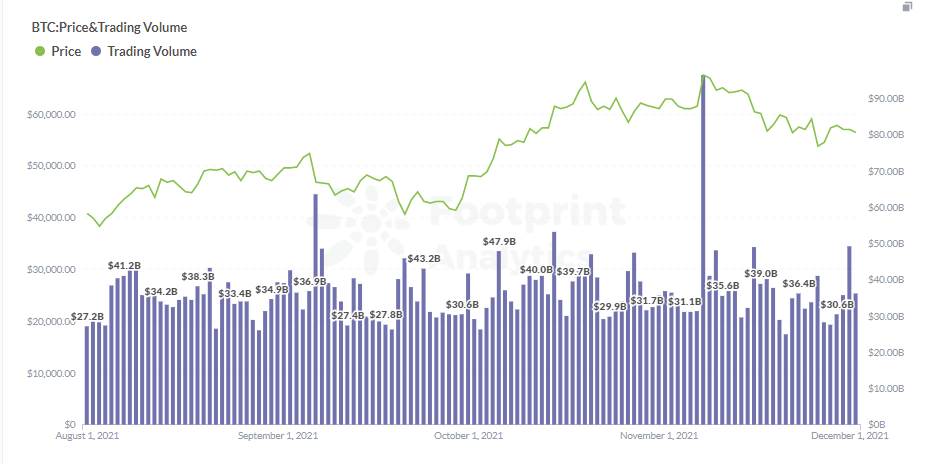 In the month of November, DeFi’s Total Value Locked (TVL) surpassed a record high of $288 billion, up by 32.7% MoM, and Bitcoin and Ethereum surpassed previous all-time peaks.

Although NFT trading activity slowed, it has not affected fundraising in the sector.

Likewise, the price of Etheruem rose to a new high of $4,800 on Nov. 8 and has remained above $4,000 as of writing. This rise comes not only from the launch of Etheruem 2.0, and features of Layer-2, providing users and projects with a better experience, higher efficiency and lower gas fees.

Most importantly, with the upgrade from POW to POS and the formation of automatic destruction, the circulating supply of ETH has been restricted, causing a scarcity of ETH and a natural price rise.

Compared to October, DeFi’s TVL has been booming, reaching an all-time high on Nov. 9. The competition for TVL dominance within DeFi has also become increasingly fierce among chains and projects.

Convex Finance, which officially launched on May 17 this year, has overtaken Yearn Finance ($16.27 billion) as the leading yield project in terms of TVL ($6.06 billion) on Nov. 30. It is now the third-largest DeFi project, even overtaking Aave ($15.72 billion).

What made Convex Finance so popular?

Convex aims to improve on Curve’s UX shortcomings with a one-stop platform for CRV pledging and liquidity mining. It aims to simplify the process of locking and pledging CRVs on Curve through an easy-to-use interface with CVX tokens, and to boost the growth of the CRV ecosystem by increasing the compensation of CRV holders and liquidity providers. Its new economic model is one of the key features of DeFi 2.0.

Curve continues to lead the DEX category with $21.5 billion in TVL. From its inception, it has positioned itself as a decentralized exchange specifically designed for stablecoins, solving the issue of high slippage in the AMM model as well as high gas fees, which will undoubtedly be taken into account when using stablecoins, thus making inroads with investors.

In the past 30 days, one of the fastest-growing chains has been Avalanche, with TVL rising from $8.63 billion in October to $14.2 billion in November, a 65% increase, ranking the fourth in TVL. Its success comes from its growing liquidity mining activities, increased incentives and EVM compatibility.

In November, NFT trading volumes fell by another 27%

Since July, the popularity of the crypto market has moved from DeFi to NFT, with NFT’s trading volume peak in August ($5.5 billion) and has accumulated to US$19 billion this year so far, according to Footprint Analytics.

While trading volume has decreased, collectibles still hold a solid 68% of the NFT market share, with art and gaming holding 16% and 7.3% respectively. It is no surprise then that CryptoPunks collectibles, the most well-known NFT collection, subsequently produced a slowdown in trading volumes. The likes of the DeFi ecosystem are constantly updating and iterating to offer better and better models to both projects and users, so the NFT market needs a newer, more exciting project that can help reignite the market.

NFTs and DeFi have become popular avenues for capital investment. According to Footprint Analytics, the largest percentage of investment funds in November entered DeFi, overtaking NFTs. One reason is that DeFi is iterating to DeFi 2.0, innovating in terms of capital efficiency and reducing gas fees, the current pain points for investors.

Financing is still in the early stages

In 2021, fundraising has been dominated by seed round investments, occupying 60%. Investments in the global blockchain sector are still in the early investment stage, with new types of projects of all kinds constantly sprouting.

Different investment focus, AU21 having the highest number of investments

According to Footprint Analytics, AU21 Capital is currently the largest investor with 119 investments, which is a fund dedicated to supporting the most talented people in the blockchain space. Its main activities include early-stage venture capital, initial token offerings, and seed investments.

The crypto market has seen groundbreaking growth across all sectors this month, with BTC and ETH hitting all-time highs and DeFi setting new records, giving most investors and users a boost of confidence. Ethereum and BSC continue to play a vital role in decentralized finance, and Avalanche is not far behind. Solana and Terra are also continuously improving.

The decline of NFT monthly trading volume does not spell doom for NFTs, but indicated the market is waiting for a push to reignite activity.

For more data developments and content from the DeFi ecosystem, click on the Footprint link for more project dashboards and analysis.

The above content is only a personal view, for reference and information only, and does not constitute investment advice. If there are obvious errors in understanding or data, feedback is welcome.

This report was brought to you by Footprint Analytics.