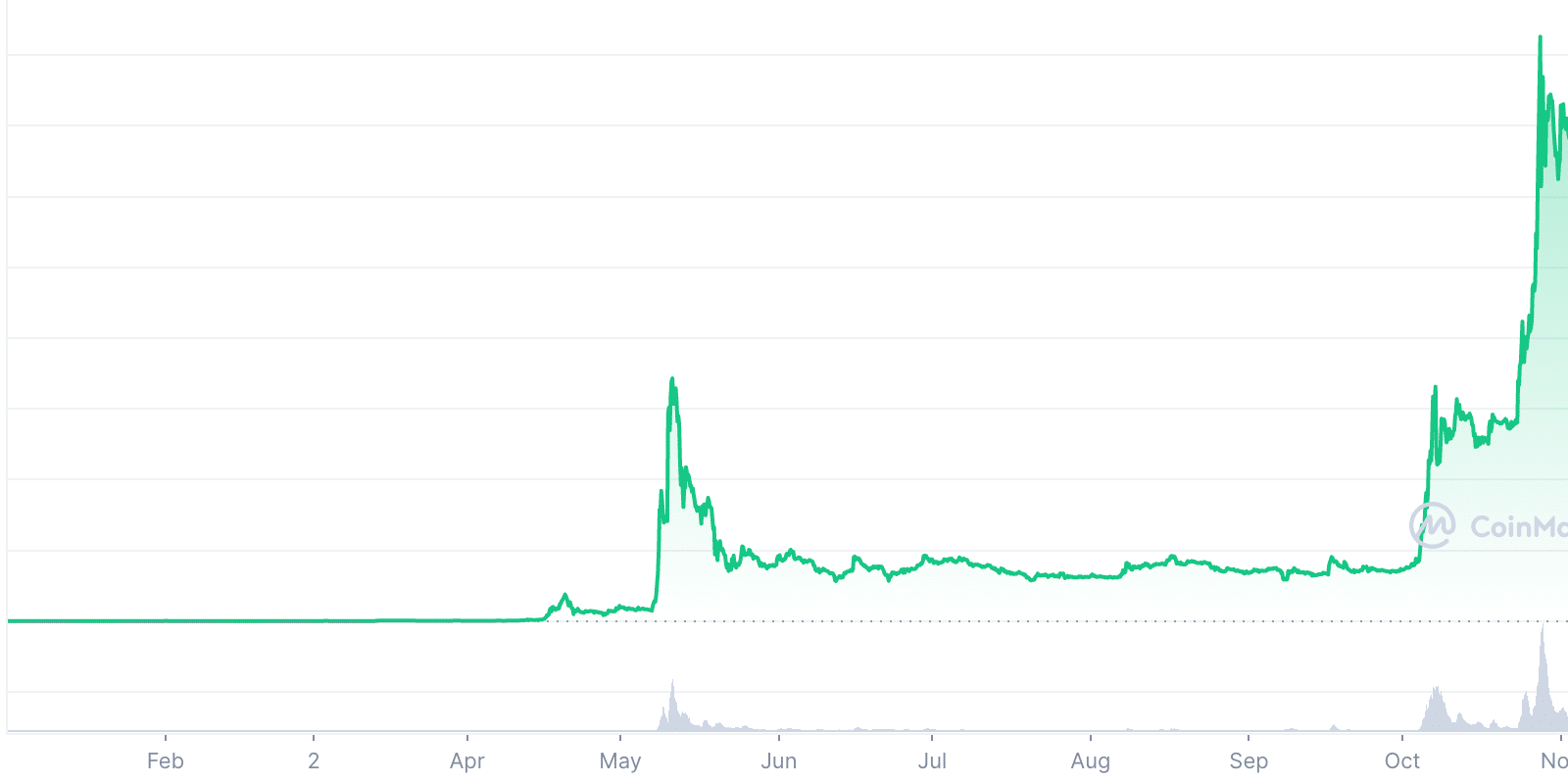 In the last few weeks, it seems that all crypto investors are talking about the Shiba Inu token (SHIBA) while the financial media are writing about it a lot. What is known about this cryptocurrency, and why is it called ‘the Dogecoin killer‘? In this article, we try to depict fully the current position of the new cryptocurrency on the market and what the future holds for it.

What Is the Shiba Inu Coin?

Shiba Inu (SHIB) is a token inside the Shiba Inu ecosystem. This decentralized meme token was created in August 2020 by Ryoshi — an anonymous person or a group of people. Ever since the Shiba Inu coin hit the cryptocurrency market, it has been compared to the DOGE coin, but in reality, they have nothing in common besides both being meme coins and an occasional endorsement from Elon Musk. The project even parodies Dogecoin with its use of Shiba Inu dog, but SHIB’s developers are aiming to solve serious, real-life problems.

SHIB was released on the Ethereum blockchain as an ERC-20 token with a total supply of one quadrillion coins. Before launch, developers transferred half of the digital coins to the Uniswap DEX and destroyed the keys. The other half of the coins was transferred to the founder of Ethereum, Vitalik Buterin. He burned 90% of the SHIB tokens by sending them to a non-existent address. In total, Buterin destroyed 410 trillion tokens worth $6.5 billion. The creators of the project had the following explanation:

In 2020, Buterin transferred more than 50 trillion Shiba Inu tokens to the India COVID-Crypto Relief fund. At the time of the transaction, they were worth about $1.14 billion. He also promised to donate the remaining Shiba Inu tokens to charity, but this time, to support longer-term initiatives.

As the project grows, the creators of Shiba Inu (SHIB) want to turn it into a full-fledged decentralized ecosystem and transfer 100% of rights to the community to manage the protocol without a governing body.

The Shiba Inu price history had a perfect start — in a few weeks of its existence, its price rose by 27,000%. Percentage-wise, it was an outstanding performance for the Shiba coin, but it’s important to mention that the token price did not reach even one-tenth of a cent.

According to data from CoinMarketCap, the price of Shiba Inu hit its all-time high of $0.00008 on October 27. This happened after SHIB was listed on several exchanges. SHIB also met the launch of its own line of non-fungible Shiboshi NFT tokens. On the same day, SHIB’s market capitalization hit a record high of more than $34.29 billion.  At the time of writing, Shiba Inu’s coin price is around $0.000037, and the digital coin is listed #12 with a market cap of over $20 billion.

The SHIB token is available on several major exchanges: Binance, Coinbase, FTX, OKEx, and WazirX. The ecosystem also hosts a decentralized exchange called Shiba Swap, launched at the same time as the native Shiba token. But the most convenient and by far the most popular way to buy SHIB is through the Binance Exchange. This is a two-step crypto-to-crypto transfer where you need to exchange another coin to Binance Smart Chain and then to Shiba Inu cryptocurrency.

It is important to mention that our team at Changelly and Changelly PRO strives to keep our platform up-to-date and provide users with the latest offers in the crypto market. That is why you’ll receive the most recent updates on Shiba Inu’s value and can seamlessly exchange the Shiba token for over 200 cryptocurrencies available on instant crypto exchange Changelly. Another great addition is that you can also trade SHIB for BTC on our full-featured cryptocurrency exchange, Changelly PRO.

As we mentioned, the world started seeing headlines like “Shiba Inu price prediction 2021” that were calling it a good investment after SHIB joined Binance. So, what’s changed about Shiba Inu’s price prognosis in November?

The Shiba Inu price dynamics have been crazy this year. The SHIB coin skyrocketed in May in a very short period of time. However, it didn’t succeed at keeping its position. But then came June; the coin made headlines again.

If you wanted to trade Shiba Inu (SHIB) at its upper price, perhaps it’s not too late. Let’s move on to Shiba Inu price predictions year by year to determine whether now is still a good time to buy or sell this “Dogecoin killer”.

Shiba Inu Price Prediction for the End of 2021

After the Shiba Inu coin’s price increases in 2021 (according to the price prediction 2021 we just looked at), the token is expected to continue its movement in 2022. To illustrate the dynamics in more detail, we divided the Shib price prediction for 2022 into two parts.

Shiba Inu Price Prediction for the End of 2022

The Shiba Inu forecast for the second half of 2022 is similar to what we’ve just discussed, minus the big spike. The average Shiba Inu coin price might be $0.0000826739.

By the end of 2022, Shiba Inu may already grow in the vibrant ecosystem it strives to be. According to their roadmap, 2022 is also when they plan to launch the Shiba Inu Incubator and the Shiba Inu Reward system.

Experts of the Digital Coin Price portal are confident in the further growth of the Shiba Inu coin. While it’s not exactly the same bullish trend as in Gov Capital’s Shiba Inu forecast, the projected performance is looking great.

According to price prediction analysts, the price of Shiba tokens is expected to continuously rise over the next 5 years. According to a Shiba Inu prediction for 2027, the highest point for the year will be  $0.0001915078 in November.

Many Shiba Inu cryptocurrency market analysts do not make long-term forecasts because there are many unpredictable factors that can affect the price of Shiba Inu in the long term. However, it’s still possible to make a Shiba Inu price forecast for 2030; you just need to take it with a bit of skepticism.

Should You Buy Shiba Inu Coin?

According to Shiba Inu price predictions we’ve analyzed, it can be a good investment. The growth potential is over 100% for the next few years. However, it’s better to buy Shiba Inu in moderate amounts because the project hasn’t yet established its real-world value.

Keep in mind that information about the Shiba Inu coin is given for informational purposes only. Knowing an approximate SHIB price is helpful, but as with any coin, you need to make your own analysis of the price action. Before making any investment decisions, always do your own research beyond just looking at the Shiba Inu forecast.

In addition to its native token, the Shiba Inu ecosystem also hosts LEASH and BONE, which you can buy on the official website. Make sure you dig about enough information about these coins because they are far less known than Shiba Inu.

If Shiba Inu (SHIB) maintains its current level of growth, it won’t be able to reach $1 in the near future. Our Shiba Inu price prediction has a more realistic outlook. Still, even without $1, you can buy Shiba Inu and find it to be a fantastic investment opportunity.

But when in the crypto market, never say never in any price prediction. Who knows if Elon Musk will post another promotional Tweet for his favorite meme coin and if Shiba tokens will see massive gains shortly after. What’s more realistic, though, is Shiba Inu taking over Dogecoin. Shiba Inu has the advantage of having a lower supply.

There is no doubt that the Shiba Inu coin is real and can be traded. If you want to get SHIBA, the best place to get it is an instant cryptocurrency exchange Changelly, which allows you to swap SHIBA to a wide range of 200+ cryptocurrencies. In case of any questions, do not hesitate to contact our Support Center!