Why Is 2021 The Best Time To Invest In Ocean Protocol (OCEAN)? 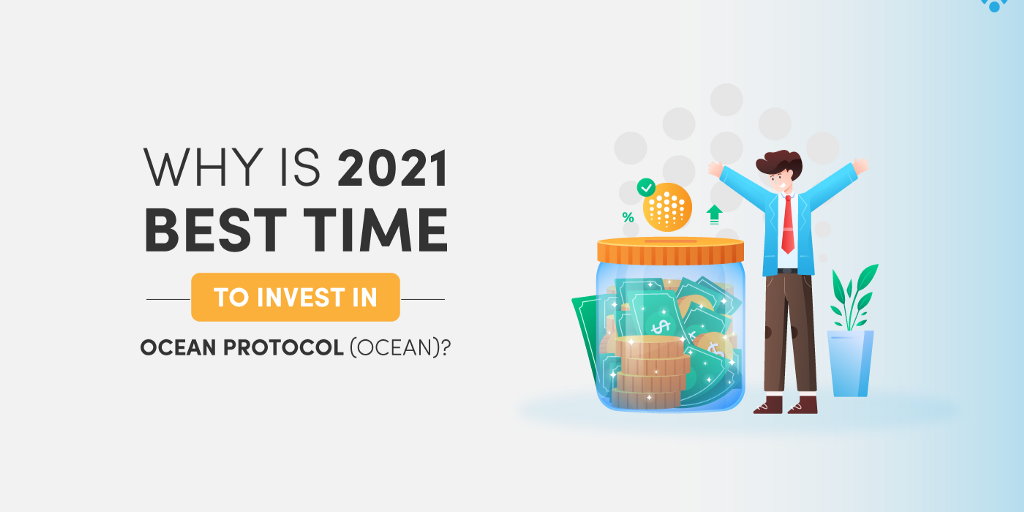 Is OCEAN Protocol a Good Investment?

Ocean Protocol is up 29% today, making it the greatest gainer. OCEAN is in the limelight, with a market validation of $829 million and a 24-hour trading volume of $333 million. What exactly is the Ocean Protocol? Let’s have a look.

What Is Ocean Protocol (OCEAN)?

Ocean Protocol is a blockchain-based ecosystem that enables individuals and organizations to effortlessly unlock the value of their data and monetize it with ERC-20 data tokens.

Publishers can monetize their data while maintaining privacy and control, and consumers can now access previously inaccessible or difficult to locate datasets, thanks to the Ocean Protocol. These datasets are available for purchase on the Ocean Market, where they can be consumed or sold later.

Each data service on the Ocean Protocol is represented by a unique data token, which is used to encapsulate a dataset or compute-to-data service, allowing third parties to conduct operations on the data without leaving the publisher’s safe enclave.

OCEAN is a utility token that is utilized for community governance and data staking and buying and selling data on the Ocean Market as the fundamental unit of trade. The price of these data tokens is determined by an OCEAN-data token AMM pool, which changes the price of the data token depending on supply and demand as it is purchased and sold.

Users may purchase and sell data tokens, engage in governance, and invest in the Ocean Market with the Ocean Protocol’s cryptocurrency, OCEAN.

The potential of OCEAN to act as a unit of exchange for data tokens is its primary application case. Notably, being an Ethereum-compliant token can exchange OCEAN and data tokens for other ERC-20 tokens like ETH, DAI, and various others.

Users who own OCEAN contribute to the protocol’s governance by voting on network upgrade proposals to determine which ideas should be pursued.

Because Ocean Market is a marketplace, holders of OCEAN tokens can stake their tokens and give liquidity to the marketplace. These liquidity providers might receive a portion of the transaction fees paid by traders who use liquidity pools in exchange for their services.

Finally, OCEAN is crucial to OceanDAO operations since it allows owners to vote on which ideas to support and steer the project’s destiny.

The OCEAN coin also has complex DeFi-like capabilities like staking and the Ocean AMM (Automated Market Maker). To preserve the token value from significant market volatility, the Ocean AMM is utilized to moderate the price of OCEAN based on supply and demand.

What Is The Best Time To Invest in Ocean Protocol (OCEAN)?

Ocean Protocol is one of the altcoins in the blockchain ecosystem with the most diverse use applications. As a result, most community members believe that the OCEAN price will be able to appreciate significantly by the end of the year.

Only about 613,000,000 OCEAN tokens are currently in circulation. According to estimates, the whole Ocean Protocol will not be given to the market for another 50 years, which will add no new tokens to the circulating supply.

The Ocean Protocol token’s current ROI (Return on Investment) is above 1232%, which is one of the reasons why so many experts say OCEAN is a solid investment.

You may also buy OCEAN Coin in India at BuyUcoin by linking your debit or credit card to your account using the Mobikwik Payment Gateway (we offer VISA, RUPay, and Mastercard).

Is Ocean Protocol A Good Investment in 2021?

Ocean Protocol has already shown to be a high-quality project by providing early adopters with a significant return on investment. Given its technical underpinnings, the OCEAN price is almost expected to rise further. While most individuals anticipate the Ocean Protocol will hit $10 in 2021, other analysts say it might hit $35 or even $50 by the end of the year.

By allowing anybody with sought-after datasets to tokenize their data and make it available on the Ocean Market, Ocean Protocol makes previously unavailable or difficult to obtain access.

This provides data publishers with a new revenue stream while also providing scientists, researchers, data analysts, and anybody else with better credible data.

Ocean Protocol gives companies the tools they need to create and launch their data marketplaces, either by forking the protocol directly or by utilizing the Ocean Protocol React hooks. It also includes a lot of documentation to help with the procedure.

By staking their OCEAN tokens on datasets on the Ocean Market, OCEAN token holders may actively engage in the token data economy. Stakers then become liquidity providers in the chosen OCEAN-data token pool, earning a portion of the pool’s transaction fees.

The Ocean Protocol is a blockchain-based ecosystem that allows individuals and businesses to capitalize on their data’s worth. Consumers may access previously inaccessible or difficult to locate datasets, and publishers can monetize their data while protecting privacy and control. OCEAN is a utility token that may be used to buy and sell data on the Ocean Market and for community governance and data staking.

Why Is 2021 The Best Time To Invest In Ocean Protocol (OCEAN)? was originally published in BuyUcoin Talks on Medium, where people are continuing the conversation by highlighting and responding to this story.