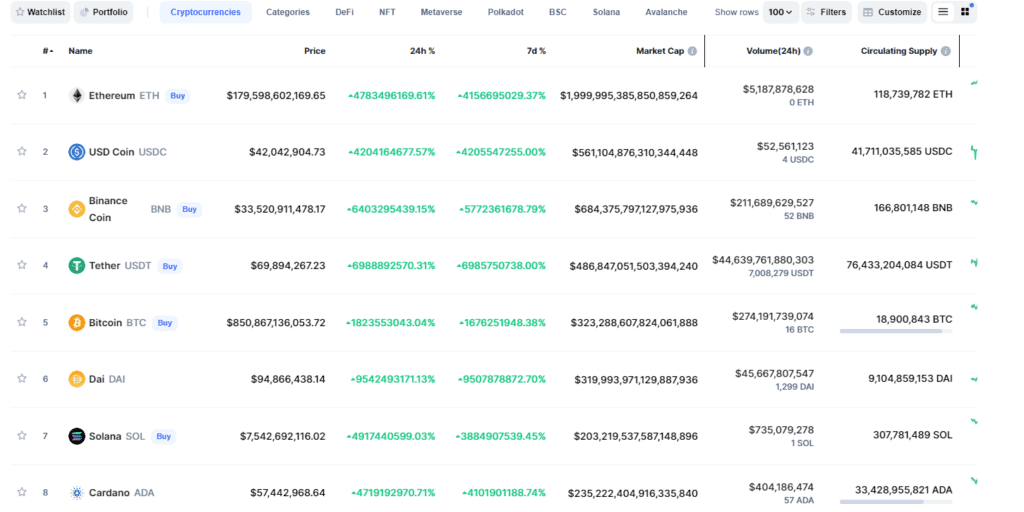 December 14, 2021, was the happiest day for a lot of cryptocurrency hodlers, even if it was only for a few minutes. All thanks to Coinmarketcap

A bug in Coinmarketcap—the most popular price aggregator in the cryptocurrency industry— started showing price spikes in the order of several trillions of dollars.

Coinmarketcap And The Trillion-Dollar Bug

The price inconsistency affected other service providers. Users of some cryptocurrency wallets (such as Jax) that obtain data from Coinmarketcap also reported that their fiat balances had gone to the moon —although it is essential to note that crypto balances remained in line with reality.

From its characteristics, everything seems to point to some API bug. No exchange registered any abnormal behavior or considerable price variation. A few minutes after detecting the error, the Coinmarketcap team managed to fix it, bringing things back to normal.

The Binance-owned platform has not yet reported the causes of this curious glitch, although they assured that they would reset their servers as an additional security measure.

Following the irregularities we observed on our platform this afternoon, despite the issue having been fixed, we will be rebooting our servers as a final step in accordance with our internal remediation plan. Apologies for the inconvenience.

The Crypto Community Has Some Fun

But it was the members of Crypto Twitter who were quick to react, bringing out perhaps the latest arsenal of clever jokes and memes to “enjoy” their recently gotten wealth before returning to normalcy.

In fact, the Coinmarketcap team itself displayed an excellent PR strategy, getting closer to their community, and even making the occasional sarcastic and facetious comment.

WELCOME BACK EVERYONE WE MISSED YOU

Although there was no explanation of the cause of the error, Coinmarketcap was emphatic in pointing out that it was not a hack, however, this possibility was highly debated in social media.