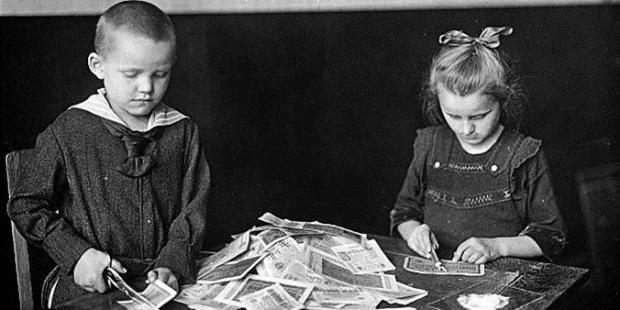 The more things change the more they stay the same; our modern inflationary currencies are beginning to mirror that of Weimar.

In the early 1920s, the value of the papiermark (the native currency of the Weimar Republic of Germany) lost almost all of its purchasing power, causing tremendous instability within Weimar for many years as society tried to wrestle with the fact that tomorrow’s money was worth less than it was today. Day after day, the currency was worth less and less, ultimately becoming a worthless piece of paper.

The value of the currency fell quickly. A loaf of bread in Berlin that cost around 200 papiermarks in January 1923 had risen to 200,000,000,000 papiermarks by November 1923. The exponential decrease in the papiermarks purchasing power can be seen by the value of one gold mark (gold) in papiermarks.

Both the monetary base in Weimar Germany (from 1914 to 1923) and the M2 money supply in the United States form “ski slopes.” A very technical term for exponential expansion of the monetary supply. Printing money decreases in effectiveness over time (law of diminishing returns). Printing money, like hard drugs (I’m told, secondary source), is most effective in the beginning. After this, all future money printing (hard drug “highs”) requires you to print more money to achieve the same stimulus effect as the initial print.

Printing new money in the short term can stimulate demand (economic benefit), pulling future demand to the present. Overprinting on the other hand is very bad for an economy as it devalues the currency and forces everything (good and services) to be re-priced to the ever-increasing new money supply. In Weimar Germany in the 1920s, overprinting led to asset bubbles and the rapid increase in the value of many assets. I find Frau Eisenmenger’s (Austrian middle-class resident) quote from 1919 very interesting.

“The value of my industrial investments is rising to an extent which seems to be incomprehensible and almost makes me uneasy.” — Frau Eisenmenger, December 15, 1919, “When Money Dies” (emphasis added).

Today, we also see asset classes increasing in value at alarming rates. From the GameStop short squeeze in January 2021 to the rapid rise in the value of non-fungible tokens (NFTs) the rate of growth of some of these investments seems rapid, excessive and speculative in nature. An NFT that was worth $1,000 one month is worth $500,000 the next.

For the record, this isn’t a critique on NFTs or if they have value. It is the rate of growth in some NFTs that I find alarming. Its speculative rise is telling and reminds me of this quote from the book, “When Money Dies,” which accounts for the hyperinflation of 1920s Weimar Germany.

“As old virtues of thrift, honesty and hard work lost their appeal. Everybody was out to get rich quickly, especially as speculation in currency or shares could palpably yield far greater rewards than labour.” — Adam Fergusson, “When Money Dies.”

As the value of currency declines, the incentives to work and save your earnings in said currency also decline. Most residents subconsciously don’t see a way to grow their wealth through working hard and saving anymore. Many resort to speculation to “keep up” with higher inflation burdens that push up their cost of living.

Budget deficits is another similarity from Weimar Germany to today. Countries that print too much of their currency, also tend to run a budget deficit. Countries with a budget deficit tend to print too much and vice versa, oftentimes creating vicious feedback loops, like a microphone next to a speaker. To make up a deficit, a country can either increase production, raise taxes or print more money to “monetize the debt.” Today, as experienced in Weimar Germany, we are seeing debt monetization to make up the deficit of surplus spending. Weimar Germany had to monetize their debt due to forced payment (reparations) to the Allies for losing WWI. Today, governments spend more than they earn (tax) and grow their balance sheets at an increasing rate to make up the difference in their budget deficit.

Worse than the printing and debt monetization, Governments today (like Weimar Germany before it) don’t seem to acknowledge that the printing is a bad thing or that printing money out of thin air even causes inflation beyond the word “transitory.” The conversation between U.S. President Joe Biden and Don Lemon of CNN on July 21, 2021, is telling.

“You seem pretty confident that inflation is temporary, but you are pumping all of this money into the economy, couldn’t that add to (inflation)…” — Don Lemon

The lack of connection between the money printers and inflation is eerily similar to 1920s Weimar Germany.

“The Chancellor would accept no connection between printing money and its depreciation. Indeed, it remained largely unrecognized in Cabinet, bank, parliament or press.” — Adam Fergusson, “When Money Dies.”

“Cooked” CPI numbers, coincidentally, was also a trait experienced in 1920s Weimar Germany. “There was such an alarming rise in the cost of living that to prevent agitation the index had to be cooked.” — Adam Fergusson, “When Money Dies.”

In what world is year-over-year inflation calculated at 4–6% (as measured by CPI) when food and housing prices are up more than 20%? Last time I checked, shelter and food are pretty good cost of living measures.

Higher prices are caused by pulling too much future demand backward to the present. The system cannot cope with the demand, resulting in the higher costs and breakdowns in supply chains as the market readjusts (and re-prices) to the new demand. Supply shortages and keeping store shelves fully stocked is becoming harder and harder in today’s economy. Headlines are starting to read similar to that of Weimar Germany, where labor and supply shortages were commonplace during high inflationary years.

“Many shops declare themselves to be sold out. Others close from one to four in the afternoon, and most of them refuse to sell more than one article of the same kind to each customer. The rush to buy is now practically over as prices on the whole have been raised to meet the new level of exchange. … But on the whole, as far as Berlin is concerned, it is the Germans themselves who are doing most of the retail buying and laying in stores for fear of a further rise in prices or a total depletion of stocks.” — Adam Fergusson, “When Money Dies.”

I also understand and acknowledge the COVID-19 lockdown narrative to shortages and that stopping and restarting the economy is not easy. Having said that, the persistence of the labor and supply shortages are now commonplace and, in my opinion, not transitory. Supply chain breakdowns and shortages spill over to the labor markets as well.

“The present labor unrest is caused by the fall of the mark and the impending new taxation, both of which send the cost of living up.” — Adam Fergusson, “When Money Dies.”

In Weimar Germany, rising costs of goods, services and assets led to a widening wealth gap between the rich and poor. More and more wealth was concentrated into fewer and fewer hands.

“Inflation is the ally of political extremism, the antithesis of order.” — Adam Fergusson, “When Money Dies.”

Today, extremism is rampant. There are no longer ideas, there are sides (Left versus Right).

All of the similarities outlined in this article, which are occurring today, bear a striking similarity to the events of Weimar Germany. In my opinion, today’s events are caused by the rapid decrease in the value of the circulating currencies. If history continues to rhyme, the events we are seeing today will get far worse before they get better. As a result, you need to protect your wealth by owning scarce assets that the governments cannot print should the governments continue to devalue the currencies we use on a day-to-day basis. Scarce assets such as bitcoin primarily. Other scarce assets being precious metals, agricultural and transportation production and real estate.

Lawrence Lepard best summarizes why bitcoin is the loudest monetary fire alarm (in relation to measuring inflation in the current economic system) in this quote:

“I’m a big proponent of Bitcoin and unfortunately a lot of people in the gold business … don’t take the time to understand and study Bitcoin and they should … It’s tricky, because there are a lot of you know ‘shitcoins’ and other alternatives, there is a lot of pump and dump … Crypto is full of a lot of messy stuff that leads typical sound money investors to go ‘that’s all bullshit, I’m not even going to look at it.’ That’s the wrong conclusion. You should look at the core base crypto out there which is Bitcoin and you should recognize what it is technologically. And what I would say that is, is an incredible innovation because if you think about what money is, money is nothing more than a ledger. I mean before we had gold or currencies or anything else we sat in caves and we kept score, I killed one bison, you killed two bison, you owe me one… etc.

“Money is just a way of keeping track of who owes who what and if you can create a digital ledger that is immutable and can’t be cheated on that’s arguably even sounder (as a form of money) than gold because its triple entry accounting. Everyone can see it. Whereas with gold, they’ve managed to corrupt the gold price because the central banks have got control of the banks and the banks have control of the gold and they have created a lot of paper Gold. So, in a sense what that makes is it makes Bitcoin as the loudest monetary fire alarm in the system right now.” — Lawrence Lepard, interview with David Lin of Kitco News

During high inflation environments, the value of a currency is worth less and less each day, ultimately becoming worthless. The majority of the population loses a large percentage of their wealth in these high inflation environments. Restarting again at zero. The stakes are high to learn what has happened in the past so we do not repeat the same mistakes in the present.

This is a guest post by Drew MacMartin. Opinions expressed are entirely their own and do not necessarily reflect those of BTC Inc or Bitcoin Magazine.