60% Think a New Bitcoin ATH Will Come Before $29K: Survey 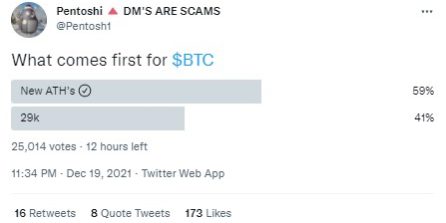 Ever since the massive crash that we saw on December 4th, bitcoin’s price has been moving sideways. The bulls have so far failed at all attempts of recovery, while the bears are also not managing to push the price lower substantially.

However, a considerable part of the community seems to believe that things aren’t as gloomy and that a new all-time high will come before reaching the $29K lows.

Pentoshi, a well-known pseudonymous trader and a very popular member of the cryptocurrency community, launched a poll on Twitter on Sunday, asking the community if they see a new all-time high or $29K coming in first for the BTC price.

It appears that the majority of those who voted believe that moong comes before gloom.

It’s worth noting that there’s still plenty of time before the poll ends, but the 25,000 votes already in give a pretty reasonable sample size. 60% of the people believe that we are in for a new all-time high, while the rest think that the price will retest the $29k lows that we saw in July.

At the time of this writing, the price hovers around $46,200, down 2.7% in the past 24 hours following another disappointing weekend. The entire market cap sits below $2.3 trillion, whereas Bitcoin’s dominance is at $38.5%.

The poll results might seem quite optimistic, but looking at hard data from the well-known crypto Fear and Greed Index reveals an entirely different picture. The metric is currently in a state of Extreme Fear.

The index analyzes emotions and sentiments from various sources and crunches them into this particular number. It’s also worth noting that this particular data set is only for Bitcoin, and it takes into account volatility, market momentum, social media sentiment, surveys, dominance, and trends.

Despite the seemingly positive results from the aforementioned Twitter poll, the market continues to chop as the majority of cryptocurrencies are down anywhere between 2% and 10% in the past 24 hours alone.