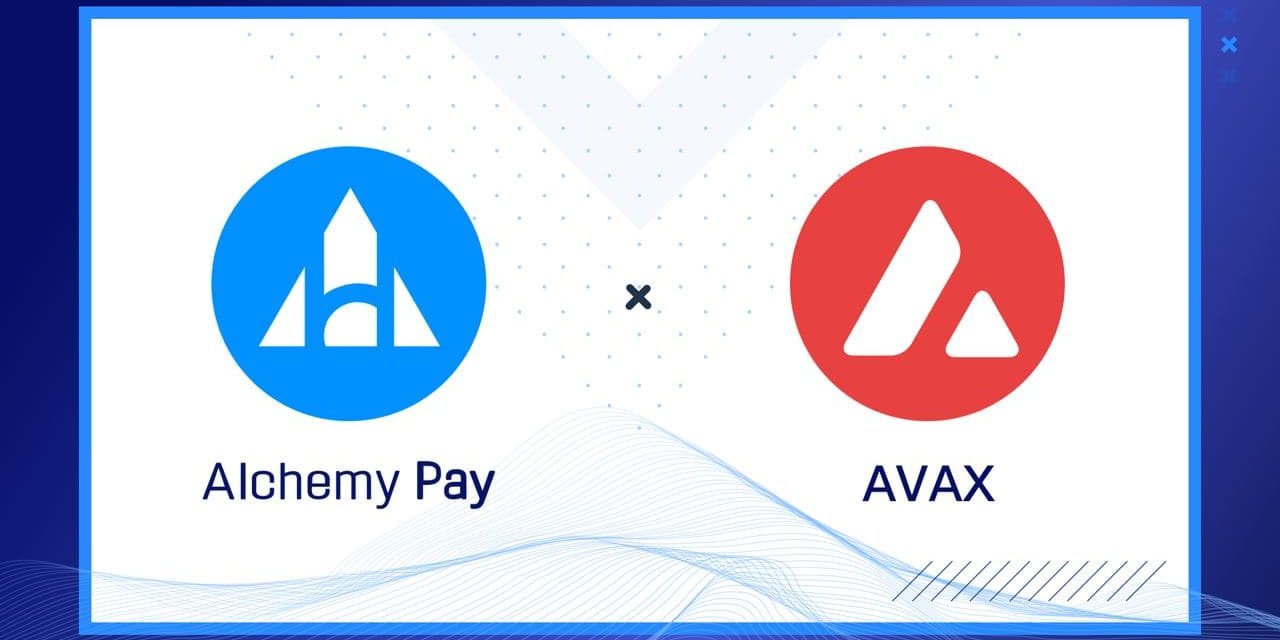 PRESS RELEASE. Avalanche has announced the integration of flexible fiat payment on-ramps on their network, thanks to a new integration with Alchemy Pay. Alchemy Pay is a payment solution that bridges fiat and crypto economies and it will now offer support for Avalanche’s public blockchain’s native token AVAX for payments. Avalanche also announced they will be joining Alchemy Pay as a founding member of the Blockchain Infrastructure Alliance.

Avalanche is a layer-1 blockchain that aims to digitise the world’s assets on what is currently the fastest smart contracts platform in the industry. This year, it has seen a huge growth in activity by attracting developers to create a thriving decentralized finance ecosystem. It offers compatibility with the Ethereum Virtual Machine, meaning developers can seamlessly port applications from Ethereum. Avalanche makes launching DeFi applications simple and makes it possible to deploy customised blockchains that fit an application’s needs.

The integration with Alchemy Pay aids Avalanche developers because it enables applications hosted in the Avalanche protocol to onboard users via direct fiat on-ramps for traditional payment platforms with the likes of Visa, Mastercard, PayPal, and multiple local payment channels around the world. Despite the flexibility and speed of the Avalanche network, a major factor behind adoption is the ability to bring in new users who don’t necessarily have blockchain expertise.

John Tan, Alchemy Pay’s CEO, explained, “We like the idea that people will have an easy experience when they come to blockchain and DApps. By providing standard fiat channels we can allow users to enter the ecosystem directly. We want to get to the point where users can enter the crypto economy because they’re attracted by a particular app and not necessarily because they have prior knowledge of the blockchain and crypto space.”

Alchemy Pay has also integrated the AVAX token into its global crypto-fiat gateway so that it can be more widely used for business to business or customer to business payments. The payment network currently supports use in 65 countries and has more than 300 payment channels. It has a global reach of more than 2 million merchants through partnerships with mainstream payment and e-commerce platforms such as Shopify, Arcadier, and QFPay.

The AVAX token that is used to pay online or in-store on the Alchemy Pay network can be converted automatically to fiat currency for the convenience of merchant partners. Alchemy Pay is focused on broadening crypto payment acceptance by offering low fees and fast settlement without requiring businesses to adopt new hardware.

The ability to handle transactions between fiat and cryptocurrencies attracts new users and this integration means AVAX can now move seamlessly between blockchain and non-blockchain economies. It will also encourage users to view AVAX as a medium for interacting with DApps.

Over the past months, Alchemy Pay has integrated a number of leading cryptocurrencies onto its global crypto-fiat network, including $MATIC, $TRX, and $NEO. It also recently co-founded the Blockchain Infrastructure Alliance (BIA) alongside NEO, NEAR and Polygon. The alliance brings together industry leaders, innovators, and investors to create synergies across all areas of blockchain technology and collectively promote the development of decentralized finance.

The rise of Avalanche in the past few months has been impressive, with the total value locked going from less than $1B USD in August to $12B+ today. It’s inclusion as a founding member of the Blockchain Infrastructure Alliance will bring Avalanche closer to other leaders in the space and further strengthen BIA’s ability creating a more unified blockchain industry.

Alchemy Pay is an integrated fiat and cryptocurrency gateway solutions provider, powering seamless crypto and fiat acceptance for merchant networks, developers, and financial institutions. The company drives adoption of blockchain technology by making crypto investment, commercial transactions, and DeFi services readily accessible to consumers and institutions in the fiat economy. Today, Alchemy Pay supports over 65 countries with 200 payment channels and has touchpoints with more than 2 million merchants through partnerships with industry giants such as Binance, Shopify, Arcadier, QFPay and more.

Avalanche is the fastest smart contracts platform in the blockchain industry, as measured by time-to-finality, and has the most validators securing its activity of any proof-of-stake protocol. Avalanche is blazingly fast, low cost, and green. Any smart contract-enabled application can outperform its competition by deploying on Avalanche. Don’t believe it? Try Avalanche today.