Publicly-Traded Bitcoin Miners Have Been Outperforming The Bitcoin Price 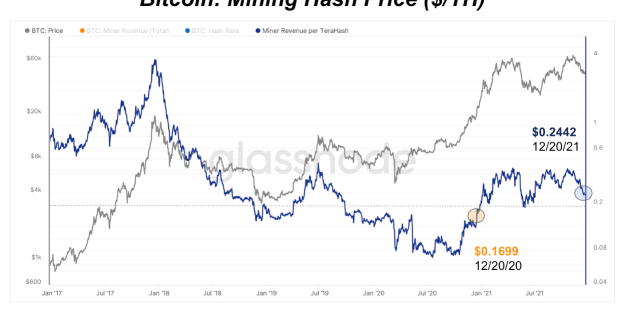 Four publicly-traded bitcoin mining companies have outperformed the price of bitcoin since 2020 for a few key reasons.

In regards to the performance of publicly traded miners, we will be looking at their performance since the start of 2020 in both USD and BTC terms.

RIOT, MARA, BITF, and HUT will be examined specifically.

Since the start of 2020, these four companies have outpaced the performance of bitcoin, and there’s a few key reasons why. Namely, publicly-traded equities are often valued using a multiple of their current earnings/cash flows.

Towards the last quarter of 2020, miner hash price started to explode, and thus the revenue and subsequently public miner market capitalizations followed. Hash price is quantified by dividing hash rate by miner revenue (dollar per terahash in particular).

Since the hash price bottomed in October of 2020, miners have outperformed BTC by a wide margin, due to hash price increasing by as much as 400% during the time period.

What you should gather from evaluating the performance of publicly-traded miners against bitcoin itself is that due to the capital structure of their business and the valuations present in equity markets, miners can and likely will outperform bitcoin over periods when hash price rises significantly.

Bitcoin-denominated hash price is programmatically trending towards zero as hash rate rises and as issuance declines with each subsequent halving.