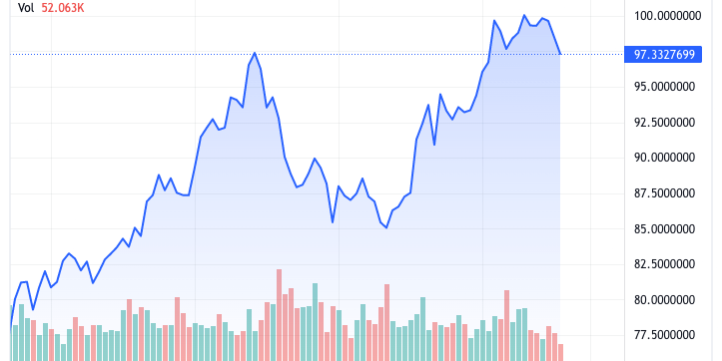 The Terra ecosystem has experienced parabolic growth this fall which culminated this Friday as its native cryptocurrency LUNA reached its all-time high of $100.

LUNA’s growth was fueled by the significant traction UST, a stablecoin native to Terra, gained this month as it got listed on major cryptocurrency exchanges.

Terra is breaking its own records

While it’s long been discussed in DeFi circles, Terra has only recently broken through to the broader crypto market and began attracting the attention of retail investors. In December alone, Terra’s native token LUNA saw its price increase over 78%, jumping from a relatively stable $56 it established at the end of November to its all-time high of over $100 on December 24th. In the week leading up to Christmas Eve, LUNA saw its price increase by 40%.

Rising prices increased the total value locked (TVL) on Terra to $21 billion. According to analytics platform DeFi Llama, this number makes Terra the largest DeFi ecosystem in the world after Ethereum. Out of the $21 billion, $3 billion was added in the two days between December 22nd and December 24th.

Terra’s growing market presence didn’t have a positive effect just on LUNA. Terra’s stablecoin UST also reached a significant milestone earlier this week as it surpassed DAI as the largest decentralized stablecoin by market cap. UST removed the Ethereum-based DAI from its long-held throne by reaching $9 billion in market cap.

Most of this week’s growth was fueled by news that two major cryptocurrency exchanges listed TerraUSD on their platforms. On December 23rd, Huobi Global announced that it will list UST on its platform, while Binance followed suit on December 24th.