Nearly 50% of the blockchain industry’s usage comes from games 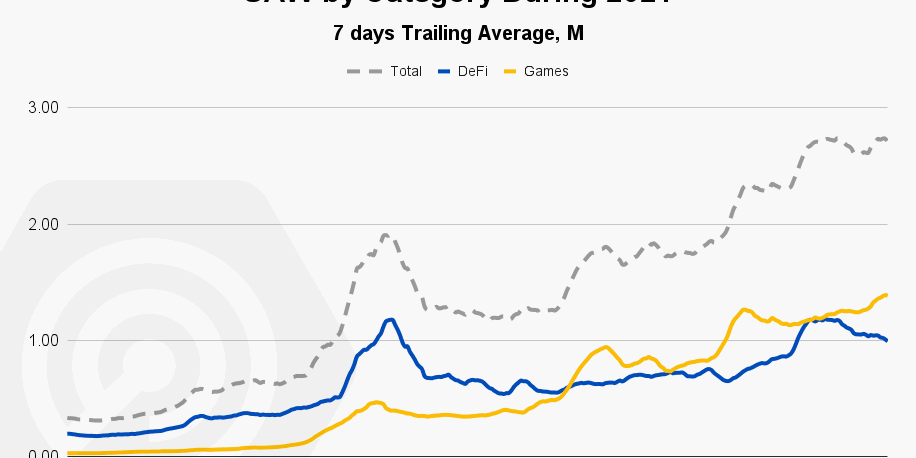 With more than 1.4 million Unique Active Wallets (UAW) connecting daily to blockchain games, they surpassed DeFi and became the industry’s leading category this year, according to the BGA Blockchain Game Report 2021, recently published by DappRadar.

While game dapps accounted for 49% of the blockchain industry’s total usage, game NFTs recorded over $4.5 billion in trading volume, accounting for 20% of this year’s total NFT sales.

While play-to-earn and GameFi dapps recorded a surge in activity in Q2, with Axie Infinity migrating to Ronin, and Alien Worlds trilium (TLM) mining becoming fully enabled, the true explosion occurred in August, when blockchain games surpassed DeFi as the most-used category in the industry.

Leveraging low transaction fees at a high processing speed, multiple blockchains such as Wax, Ronin, and Hive, surfaced as sustainable ecosystems for play-to-earn and GameFi dapps.

Thanks to hosting some of the most important GameFi dapps out there–Alien Worlds and Farmers World–World Asset Exchange (Wax) became one of the most used networks in the industry in 2021.

According to the report, VCs have invested $4 billion in blockchain games and related infrastructure during 2021, and with the funding up 5.000% compared to 2020, further growth and development can be expected in the year to come.

In the meantime, Axie also became the most traded NFT collection surpassing $3.8 billion in all-time trades.

Referencing Token Terminal, the report noted that the play-to-earn dapp generated more than $1.2 billion in revenue in the second half of the year–surpassing major dapps like OpenSea, Uniswap and PancakeSwap, and even entire blockchains like BSC, Bitcoin, and Solana.

Meanwhile, with over 350.000 daily UAW, the trading NFT card game Splinterlands became the most played game based on on-chain activity.

The game’s success was spurred by the launch of Splinterlands’ governance token, SPS, in late July. Since, the game released a new wave of cards, the Chaos Legion, and is preparing to introduce resource gathering on virtual lands–adding another economical layer.

The post Nearly 50% of the blockchain industry’s usage comes from games  appeared first on CryptoSlate.