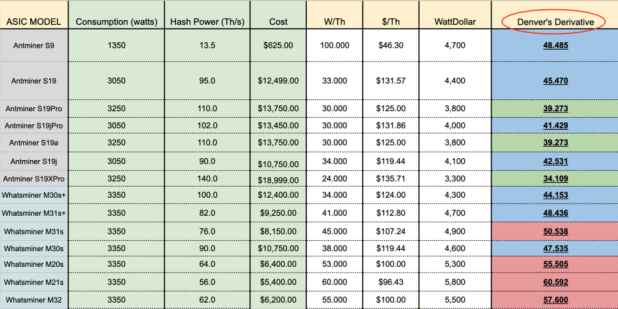 An incredibly interesting way to figure out the value of an ASIC given its consumption and profitability over an extended period of time.

This article is to serve as nothing more than a contribution to the bitcoin mining community.

I’m not a mathematician.

I’m not a statistician nor a certified economist.

I’m just a bitcoin miner, a builder, and a freethinker that loves spreadsheets and algebra and, for the last four years, I’ve been trying to figure out a way to properly value bitcoin ASICs at any given time while taking into consideration overall market conditions.

The following is the evolved calculation I have used to determine whether or not I should pull the trigger and purchase an ASIC — or rather this is a calculation that helps me from becoming overzealous and overpaying for hardware. I’ve been inspired to share this by the phenomenal folks in DBF.

It has kept me from making mistakes, hopefully you find it to be useful.

Below is a screenshot of some current bitcoin ASIC models, their respective specifications and their DD rating:

Keep in mind these calculations were based on the current hash price of $0.275 and, therefore, an elongated hash price of $95.48 at the time I wrote this article per the Slush Pool/Braiins dashboard:

The problem today is that ASICs are priced based more on bitcoin’s market price than on profitability of the ASICs.

While that might sound like the same thing and, yes, bitcoin’s price definitely plays a role as to whether or not an ASIC is profitable — but it’s not the only variable — total network competition needs to also be taken into account. This is why the hash price is important — the hash price takes into consideration the value of a single Th/s over the course of 24 hours — this accounts for total competition/difficulty on the network. Therefore, ASICs should be priced based upon hash rate, but instead they’re seemingly priced solely on bitcoin’s market price and sentiment around that market price.

A quick example of how this creates disequilibrium throughout hardware markets:

Let’s say today an Antminer S19 is priced at $10,000 even and bitcoin’s market price is at $50,000 even. In today’s market, what we see is if bitcoin’s market price moves to $55,000 (a 10% increase), we’ll often see a comparable relative increase in ASIC prices, and that $10,000 ASIC is now $11,000 delivered. But that ASIC may not be 10% more profitable denominated in USD. Here’s why: If, while the bitcoin price increased from $50,000 to $55,000, the total competition on the network could have increased from 160 Eh/s to 168 Eh/s (5% increase). So yes, the bitcoin that the same ASIC is earning is now worth 10% more, however, it is also earning 5% less bitcoin than it was before, so really that ASIC is maybe only 5% more profitable, but it’s now 10% more expensive. I wanted to quantify that alpha to try and avoid overpaying for hardware, while being able to take advantage of price dips in hardware cost relative to profitability (a rare occurrence).

This is why incorporating the elongated hash price variable was important: It allowed me to tether the price and efficiency of ASICs to the reality of how profitable bitcoin mining is “in general” (or how valuable a Th/s is, in general) at any given time.

This reality is indicative of an immature market ripe for disruption, innovation and commoditization. I hope to see maturation in the coming nine years, but in the short term, I’ll be relying upon this derivative to know whether or not my ASIC price is on par with historical prices.

The reason I personally find this calculation to be useful is because it takes into consideration the three most important variables when purchasing an ASIC:

This way I could tell if I was getting a good price across time.

This way I could help those who want to mine at home using Upstream Data’s BlackBox.

I hope you find it to be useful and I welcome any and all criticism.

May you find great success in all your hashing endeavors.

This is a guest post by Adam Ortolf. Opinions expressed are entirely their own and do not necessarily reflect those of BTC Inc or Bitcoin Magazine.