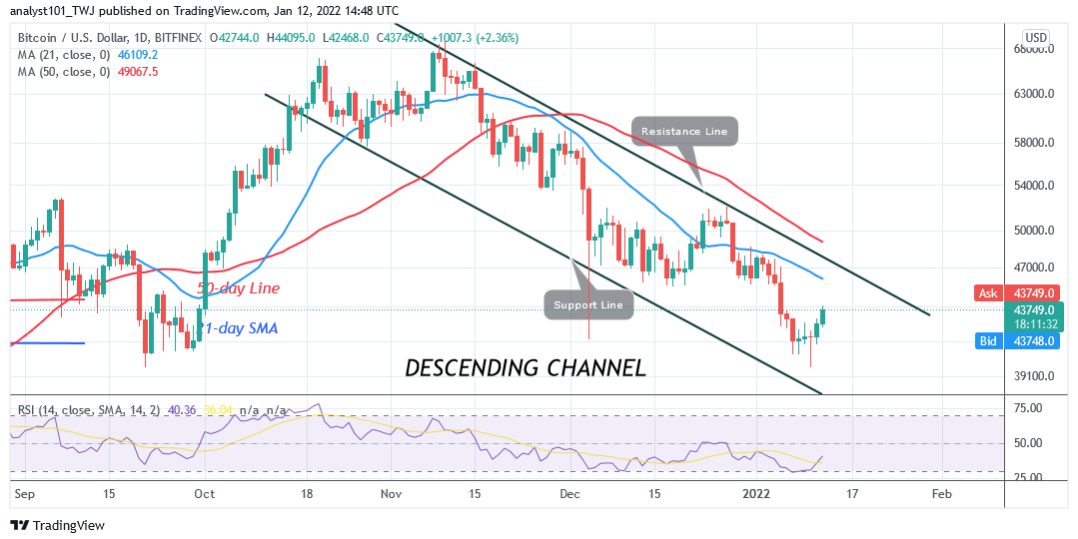 On January 10, BTC/USD has rebounded above the $39,100 support as the market rose to the previous high but can bulls reclaim $50k High? The upward move is facing resistance at the high of $44,000. Bitcoin bulls have an uphill task to resume upside momentum. Buyers will have to break above the moving averages or the $48,000 resistance.

On January 10 rebound, BTC price rallied above $$43,500 but was resisted at the $44,000 resistance zone. Nevertheless, if the bulls have broken above the $45,000 high, the BTC price would have fallen to the previous range zone. Before the January 7 price slump, BTC’s price was fluctuating between $45,600 and $48,000. This enables it to retest the $50,000 psychological price level. Nevertheless, as buyers fail to break above the $45,000 high, BTC price is likely to decline to the $40,000 psychological price level.

A Third of Americans to Buy Bitcoin in 2022, Says RIC Edelman

Ric Edelman is the founder of financial advisory outfit Edelman Financial Engines. According to him, the future of Bitcoin is bright after making some promising predictions about the future of the seminal cryptocurrency. In an interview, Edelman said: “We’re already at a quarter of that number with 24% of Americans owning Bitcoin. It won’t be that much of a stretch for it to get to one-third. Bitcoin is becoming more and more mainstream. People are hearing about it everywhere — it isn’t going away.” In his view, 2022 has started on a rocky note but governments, corporations, foundations, and pension funds are investing in Bitcoin: “There is major institutional involvement.”

Nevertheless, BTC’s price is making an upward move but can bulls reclaim $50k high?. The uptrend is hindered at the $44,000 resistance zone. Bitcoin is trading in the overbought region of the market. The bulls will have to clear the initial resistance so as to rise and retest the $50,000 psychological price level