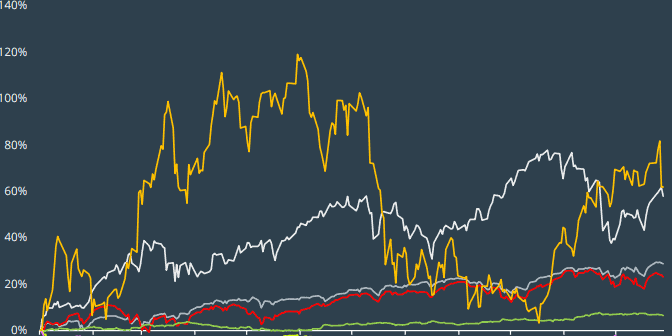 Despite the price slumps at the end of last year, bitcoin still managed to close 2021 with an increase of over 60%. As such, it outperformed all other major asset classes for the second year in a row, reveals CoinGecko’s 2021 report.

The popular crypto data aggregator shared its 2021 report with CryptoPotato, highlighting the eventful year in the digital asset space. Although a large portion of the focus went on DeFi, memecoins, and NFTs, bitcoin still had a crucial year in terms of its adoption and price movements.

The asset started 2021 on a high note, registering new all-time highs frequently before China’s (old) ban on anything crypto and the ousting of miners brought a massive correction mid-year. BTC resumed its bull run in early Q4 and charted yet another new record which now stands at $69,000 on news that the US finally approved its first Bitcoin ETF, even if it was a futures-backed one.

However, it was mostly downhill since then as BTC lost more than $20,000 by the end of the year and finished around $48,000. Nevertheless, it still managed to increase its USD value by 62% from the start to the end of 2021.

As such, CoinGecko noted that the primary cryptocurrency “outperformed all major asset classes in 2021 despite its relatively small return.” The closest asset from the traditional financial world was crude oil, which finished 2021 with an increase of 58%. The S&P 500 followed with a 29% rise. Next are NASDAQ (23%) and the DXY (US dollar index – 6%).

Interestingly, gold – considered by many as the ultimate hedging tool in terms of economic uncertainty – declined by 6% during 2021.

It’s worth noting that bitcoin outperformed all other asset classes in 2020 as well. Back then, its dominance was significantly higher, as its yearly surge was 281%, compared to NASDAQ’s 42% and gold’s 24%.

As mentioned above, China took its crypto ban a step further last year by completely prohibiting any mining activities. Being the country with the largest share of BTC’s hash rate at that point, this had a massive and immediate impact on the world’s largest blockchain network.

The metric slumped by more than 60% in weeks, which caused some momentary issues such as delayed block creation. However, miners quickly found new homes, and the mining difficulty adjustment mechanism did its job, so the network continued operating smoothly.

Moreover, the hash rate recovered in the following months and even charted a new all-time high a few weeks ago.

CoinGecko informed that the two countries that stepped up the most in terms of hash rate share following the China exodus are the US and Kazakhstan. The former is now responsible for over 35% of the BTC hash rate, while the latter’s percentage is at 18.