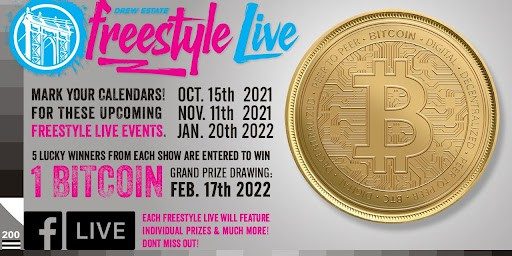 Most recently, Drew Estate has also gotten involved with cryptocurrencies due to the industry’s growing demand, popularity and usage. As such, it shall be giving away 1 full BTC (currently worth over $40,000 at today’s prices) to one lucky individual who partakes in the upcoming Freestyle Live broadcast, scheduled to occur on the 20th of January 2022. Drew Estate is picking 5 potential winners with the grand prize being announced on February 17th 2022 on the company’s Facebook page.

Drew Estate, in keeping with its unique, trailblazing, and inventive nature, will offer one whole Bitcoin to a fortunate spectator during their Freestyle Live show on February 22nd as aforementioned. A pool of 15 possible winners will be chosen at random from comments made during Drew Estate’s “Freestyle Live” as well as “Freestyle Live: Special Edition” broadcasts which were held on October 15th and November 11th, 2021, in addition to the next one on January 20th, 2022. The winner shall be picked at random during the February 17th telecast.

Drew Estate has now grown to be one of the planet’s biggest and most successful premium cigar brands. Through its passionate as well as aggressive dedication to its brands and its mature clientele, the firm has earned a reputation for breaking the typically conservative premium cigar sector.

Furthermore, Drew Estate has also gained quite the reputation for producing amazing experiences for its customers through hundreds of in-store alongside digital cigar events, such as Cigar Safari and Barn Smokers, in addition to their instructive and interactive Facebook Live stores, Sticks & Sips, and so much more.

It would therefore only make sense for the company to get involved with cryptocurrencies too, as the crypto sector has been at the forefront of the seismic shift towards complete digitalization and decentralization over the last decade. Even now, Bitcoin, Ethereum (ETH), Cardano (ADA), Solana (SOL) and so many more cryptocurrencies continue to dominate the headlines with increasing frequency, and the industry has gained so much traction and success that El Salvador made headlines not too long ago by being the first nation in history to officially make the flagship cryptocurrency legal tender.

Ultimately, Drew Estate’s Bitcoin Sweepstakes represents an unparalleled opportunity for the company to promote the growth of P2P (Peer To Peer), decentralized love that so many individuals have for the premium leaf as well as the burning passion for its time-honored history. Fans are therefore strongly encouraged to show up for the upcoming abovementioned event on time and to readily adhere to all of the different rules and guidelines which can be found here. The chances of being picked as a winner of the ‘Entry Period Prize’ shall also rely on the amount of eligible entries which would be obtained per period of entry, so participants are encouraged to keep that in mind.

Founded in 1996, Drew Estate has grown and evolved to become the third largest manufacturer, marketer, and distributor of premium cigars in the United States. Our mission – The Rebirth of Cigars – guides our ongoing business transformation while preserving our iconic, unique culture as a world-class disruptor and innovator. The company thrives on creativity and passion and is widely respected for its brands, quality of its cigars, and the unique unparalleled experiences enjoyed by our fiercely loyal customers and end consumers.