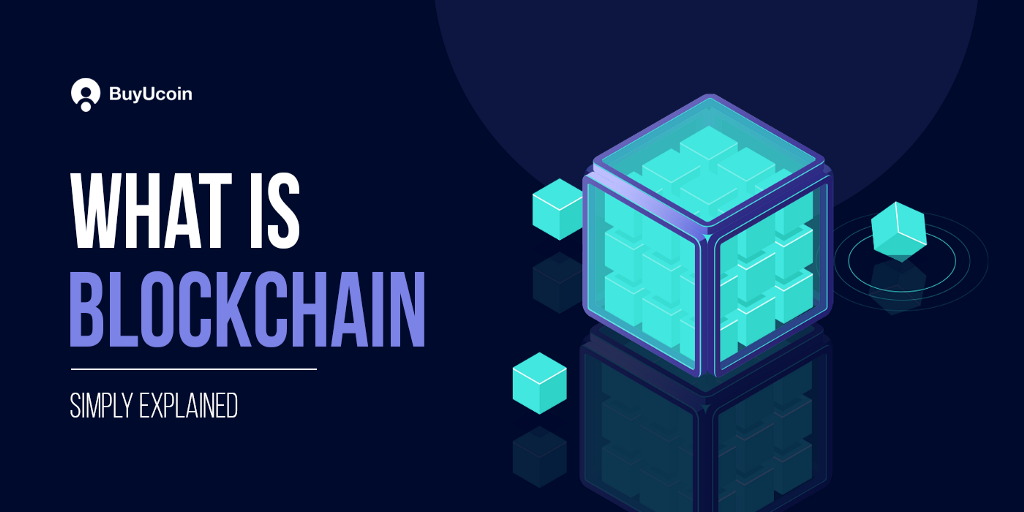 ‘Developer of Blockchain-based Service network gets $30M in funding.’

We all are acquainted with reading the news related to Blockchain. Not just because we want to, but they usually make up the headlines of the technology news section. But, have you ever asked yourself, what is Blockchain?

If we break the word ‘blockchain,’ we get two by-products, block, and chain. It reflects that the terms are somewhere linked in real-life too. Could it be a chain of blocks for storing information? Let’s deep dive in.

What is a Blockchain?

Let’s consider an analogy to explain the term Blockchain better. We all might have traveled by train at some point in our lives. The train is built using the main engine, and several compartments are joined together that work as a team. The engine then pulls up the other compartments together to your destination.

The same is the case with Blockchain. The word can be split into ‘Block’ and ‘Chain,’ which signifies that numerous blocks are chained together. As a definition, Blockchain is a database of blocks that holds transactions in a decentralized manner. It is distributed and considered as immutable when talking w.r.t. Security.

The Blockchain helps store the information in each block that can be easily distributed but doesn’t allow anyone to alter the transactions. Users can not delete or destroy the information already inside the blocks which are known as distributed ledger technology (DLT).

The block we talked about contains three elements: the data, nonce, and Hash. Data is the information kept inside the block. Hash is an algorithm that produces a unique sequence of characters (32 bytes). A nonce is an arbitrary number generated to ensure blockchain security.

The sequence of characters or Hash gets generated with the value entered in the block. The hash output will be completely different, even with minor data alterations. It ensures Security as each block stores the Hash of the previous block. Now you might be confident that Blockchain is the driving force of all cryptocurrencies.
If you want to learn blockchain in Hindi, then see this video complete solution on blockchain.

Decentralization is the process of transferring control and decision-making power to a distributed network. Contextually, this means there would be no central authority. Let us example this by taking an analogy of banks.

Banks follow a top-down approach working in a centralized manner. Databases containing information about the records, identities, and transactions are stored at a server, posing a potential threat of being hacked.

On the contrary, the databases of Blockchain are distributed across the network of computers. Each computer (or node) has access to every information of the block added since its birth.

Decentralization made transparency possible on blockchain technology. Even if I am working in Antarctica, sitting with the penguins on my side (obviously, it is a hypothetical situation), I can view all the transactions with my personal computer or hover to the website blockchain explorers to see the addition of blocks.

Decentralization paired with security is what works as the best combination for blockchains. It narrows down our search to whether Blockchain is safe?

How safe is Blockchain?

Blockchain is known for the security level it provides to consumers. It is unmatchable!

The addition of blocks is done sequentially with the hash and timestamp of the previous block stored in the current block. Hash codes are created by a math function that encrypts the output file. Let’s understand it in simple terms.

A bank’s server can be hacked into easily as it has a centralized authority, resulting in information leaks (as much private as credit card info). If someone tries to break into the Blockchain, the block would not be accepted, as under checking by other nodes, the hash codes and timestamps would lead to the discarding of such a block.

Although, for doing altercations to the Blockchain, the hacker would have to gain access to 51% of the Blockchain network. It would require a vast sum of money and resources to deplete the value. Therefore, it is pointless even to try!

Blockchains and banks are just poles apart. If you are already at this point of the article, even you could easily list out differences. We will brief you a little more.

The Blockchain provides privacy, contrary privacy in banks is just a hack away. The transactions are paced at much higher speeds, while banks take even days to perform. The transaction fees are lower, and transfers are easy to serve on the Blockchain.

Blockchain technologies have a very bright future ahead. The possibilities of blockchain implementation have spiked the graph where users could tap the energy to prevent any misuse.

With the growing climatic changes and the rapid adoption of automobiles, we need to track waste generation for a clean and green environment. Blockchain as a technology is helping municipalities to track and monitor the waste life-cycle efficiently.

Use cases of Blockchain

With the emergence of technological advancements, Blockchain has a stable foot on the ground, and you can find it almost in every field.

Apart from diving into the use-cases, Blockchain technology has tons of pros to list.

As much as Blockchain receives appreciation in terms of its facilities, there is room for untouched disadvantages.

So far from now, reading this article would have convinced most of you as Blockchain is a promising technology for the future.

As we are heading over to the digital age, where even food orders are done by a single tap, exploring the various use cases could be a bright side of the road. As countries are setting their foot to examine the fate of cryptocurrencies, we need to ensure the possible use cases they offer presently. The future of cryptocurrency in India looks bright based on the market, investors, and people willing to enter the cryptic space.

What is Blockchain Technology, and How is it Transforming Lives Digitally? was originally published in BuyUcoin Talks on Medium, where people are continuing the conversation by highlighting and responding to this story.