Apparently, Intel Is Getting Into The Bitcoin ASIC Game 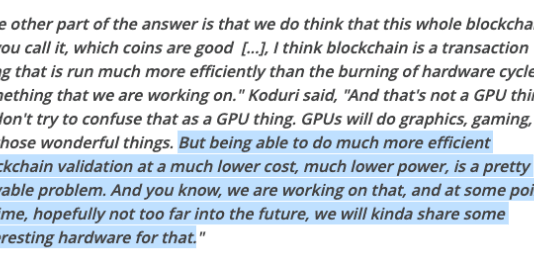 Intel thinks it can deliver Bitcoin ASICs much more efficiently at lower cost, but I’ll believe it when I see it.

The below is a direct excerpt of Marty’s Bent Issue #1147: “Apparently Intel is getting into the Bitcoin ASIC game.” Sign up for the newsletter here.

Here’s a pleasant surprise that was brought to the world’s attention this morning; it seems like Intel is preparing to unveil a Bitcoin ASIC on February 23rd at the International Solid-State Circuits Conference. According to the Tom’s Hardware post that broke the story Intel filed for a patent related to an optimized SHA-256 datapath in 2018, which would signal focus on a Bitcoin ASIC due to Bitcoin leveraging the hashcash SHA-256 cryptographic hash algorithm. It seems they may have had their heads down working to produce something Bitcoin specific.

In a YouTube interview conducted at the tail end of 2021 Intel’s Systems and Graphic Architect Raja Koduri hinted at the project:

If we take his word at face-value it seems that Raja and the team at Intel think they Bitcoin ASICs much more efficiently and at a lower cost. As with everything in the Bitcoin ASIC world, I won’t believe it until I see it. Definitely keep your eyes peeled on the morning of February 23rd for coverage of the unveil. I am hoping to be pleasantly surprised, but I’m certainly not counting on it.

With that being said, let’s imagine that Intel comes out late next month and delivers an ASIC that is cheaper, much more energy efficient and on-par with the quality of machines MicroBT and Bitmain are currently producing. What would that do to the dynamics of the mining industry? IF those conditions are met, it would be an incredible development for the industry. At the moment, MicroBT and Bitmain are kind of running the show. The entrance of a formidable competitor in the market would hopefully lead to better equipment and more favorable pricing. Bringing more price competition to market should be a benefit for smaller miners, which should have a positive effect on the distribution of hashrate ownership. On top of that, Intel has foundries in the United States and having quality Bitcoin ASICs being manufactured on US soil would help distribute what I would argue is the most centralizing aspect of Bitcoin at the moment, mining chip production.

Outside of the mining industry, having an American company like Intel signal to the market that they feel comfortable building out a business vertical dedicated to serving the Bitcoin mining industry would be a massive endorsement for the industry. Many of those who are still on the sideline may develop more confidence in Bitcoin seeing Intel enter the fray with a legitimate product.

All of the above is nothing more than speculation at this point. We’ll be sure to keep up to speed with the developments of Intel’s ASIC. In the meantime I’m a bit skeptical but am holding out hope that the market will be surprised to the upside.