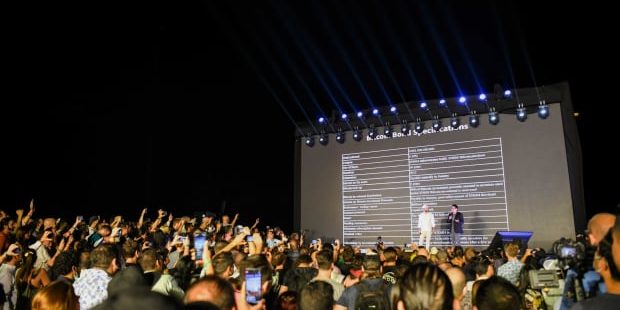 Someone had to go first in adopting bitcoin as legal tender and introducing Bitcoin takes a special kind of courage — the kind shown by El Salvador President Nayib Bukele, Strike’s Jack Mallers, and Blockstream’s Samson Mow.

In an exclusive interview with Bitcoin Magazine Mow said:

“History is being made in El Salvador and I don’t believe that most people fully understand the implications yet. The President and the Salvadoran people are showing the world a new way forward — one built upon sound money and the Bitcoin ethos.”

“The volcano bond is the most significant advance in bitcoin since bitcoin,” he noted.

El Salvador will issue $1 billion in bonds on Blockstream’s Liquid Network, a federated Bitcoin sidechain. The proceedings of the bonds will be split between a $500 million direct allocation in bitcoin and an investment of the same amount in energy and bitcoin mining infrastructure. The bond is designed to attract capital and investors.

El Salvador’s finance minister Alejandro Zelaya said in a recent interview that they will:

Simon Dixon, CEO of Bnktothefuture.com, featured in a podcast discussing the bond stating that these tokenized securities on the Liquid Network was an extraordinary historical watershed — “one of the most significant shifts that we will see in financial history”.

Chief Architect Of The Volcano Bond

Bitcoin Magazine asked Mow why he is referred to as “the architect” of the Volcano Bond and he said:

“There was a gap between the idea of a bond and the creation of an actual financial instrument that works with an exchange to do offering and listing. I brought together all the parts including Liquid and Bitfinex and made it a reality so that’s why they call me the architect.”

There’s still lots to do to prepare the bonds for release — create a government securities law, and grant a license to Bitfinex Securities to process, and list the bond issuance.

There are press reports of verbal commitments to the bond already in the works but Mow said he is not keeping track at the moment.

“We’re closer to $500M in verbal commitments now but stopped tracking so we could focus on the actual issuance and all the steps still needed to be done to go live. We’re committed to Q1 2022 and it’s likely we could see the Volcano Bond launch in February,” he added.

Bitfinex Exchange will act as a processing platform for the first and subsequent $1 billion bonds. Mow sees Bitfinex as an ideal partner to handle the book-making for the Volcano Bonds.

“Bitfinex is one of the top cryptocurrency exchanges in the world and has a massive amount of liquidity. They are also one of the most technologically advanced exchanges, supporting Liquid and Lightning, and weather major market movements with almost no downtime or issues,” said Mow.

“Bitfinex has been leading the charge for digital securities for some time now with their Bitfinex Securities division which is host to the Blockstream Mining Note (BMN) and Exordium from Infinite Fleet (EXO),” he added.

In a recent interview Mow explained that in addition to a 6.5 percent coupon, bondholders will get 50 percent of whatever El Salvador makes on the Bitcoin investment after it recoups the first $500 million.

“You could model it in a number of ways,” Mow said. “You could say that Bitcoin will gain 5 percent YOY [year-over-year] or 10 percent YOY, whatever you want, but as long as it gains something, this bond is probably better than any other bond on the market just from a traditional finance perspective.”

The essence of a Bitcoin bond is that half of it is backed by a bitcoin war chest,” Mow said.

Volcano Bonds Will Start At $100 To Be Accessible

In a recent podcast Mow explained that it was important for the Volcano Bonds to be accessible to all El Salvadorians. Because bigger investors will likely snap up the first $1 billion, Mow is setting aside a portion of the first bond to allow smaller investors to pay $100 each.

El Salvador President Bukele recently appeared with Samson Mow before an enthusiastic crowd to announce Bitcoin City, where half of the bond will go to building the new city that will be located at the base of Conchagua, an oceanside volcano, near the border with Honduras and Guatemala.

Incredibly El Salvador is blessed with lots of geothermal power from its network of volcanos, offering sustainable and affordable energy which is perfect for bitcoin mining.

Inspired by the city of Alexandria built by Alexander the Great, the city will be circular in shape, located in the eastern region of the country. It will include a central plaza designed to look like a Bitcoin symbol from the air.

Future volcano bonds will help pay for a build-out to the city that could include geothermal power plants and bitcoin mining equipment, which itself could help generate revenue for the nation.

There is some unrest amongst some bitcoiners about the formal connection between bitcoin and any state or government, given that bitcoin gives power to the people at the expense of the government.

Mow sees the contradiction but is happy to be part of El Salvador’s Bitcoin revolution, stating:

“Bitcoin is for enemies. That’s what makes Bitcoin so special — everyone can use it, even if they do not see eye to eye. It’s one of the foundational elements of sound money. Bitcoin is freedom from the state, but the state also requires money to function.”

“The key here is that a nation-state is embracing the concept of money being distinctly separate from the state and is the first step in the right direction. Everything good takes time and time will show us that everything happening in El Salvador is good for Bitcoin.”

In a podcast on the Volcano Bond, Max Keiser noted that there is some unrest about how quickly President Bukele is moving on a number of fronts, making some nervous.

But Mow is happy to be working for Bukele and expressed confidence that his leadership was a sign of strength: “He has a clear vision and he knows what he is doing and what he wants for his people”.

“We are excited to work with Blockstream and build the foundation of the financial infrastructure for the future on the Liquid Network. This is a powerful first step for El Salvador in becoming a global hub for digital capital markets. Our long-term commitment is to explore and develop a domestic platform to help facilitate the growth of our digital asset industry.”