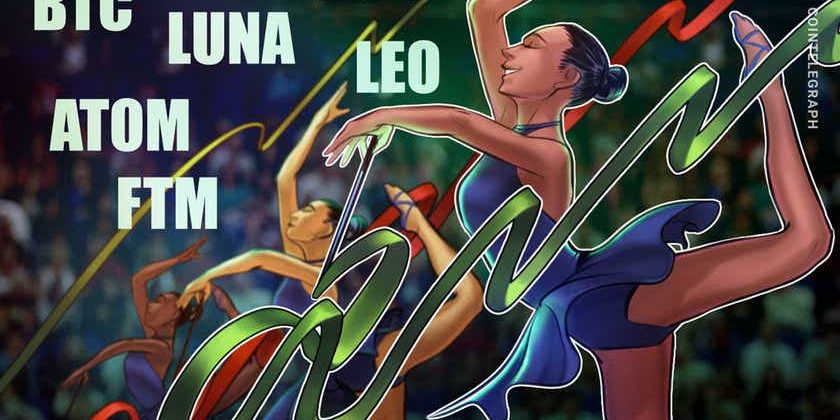 BTC is oversold and possibly ready for a relief bounce, but this could be a trap for altcoins and Bitcoin if bull volume fails to sustain.

It is not only the crypto markets that are facing selling by investors. The S&P 500 has also plummeted 8% year-to-date. However, gold has outperformed and risen about 1.76% during the period, cementing its billing as a safe haven asset.

Several retail traders who purchased Bitcoin near its all-time high are voicing their concerns on social media. However, El Salvador’s President Nayib Bukele does not seem to be worried by the recent fall as he recently announced a purchase of 410 Bitcoin at an average price of roughly $36,585 per coin.

Could Bitcoin and altcoins witness a bounce after the recent carnage? Let’s study the charts of the top-5 cryptocurrencies that may outperform if a relief rally starts.

The sharp fall of the past few days has pulled the relative strength index (RSI) near the 20 level, suggesting that the selling may have been overdone in the short term. Usually, such oversold levels are followed by a consolidation or relief rally.

Recovery attempts are likely to face strong resistance in the overhead zone. If the $37,332 to $39,600 zone flips into resistance, it will signal that the sentiment remains negative and traders are selling on rallies.

The bears will then attempt to resume the downtrend and sink the BTC/USDT pair to the major support at $30,000. A break and close above the 20-day exponential moving average ($41,427) will be the first indication that bears may be losing their grip.

The 4-hour chart shows that the pair is trading inside a descending channel pattern. The bears pulled the price below the channel but have not been able to sustain the lower levels. This suggests strong buying by the bulls who have pushed the price back into the channel.

The pair could rise to the 20-EMA where the bears may again pose a stiff challenge. If the price turns down from this resistance and plummets below $34,008, the selling could intensify. Conversely, a break above the 20-EMA could open the doors for a possible rise to the resistance line of the channel.

Terra’s LUNA token has been trading inside a descending channel for the past few days. The price dropped to the support line of the channel on Jan. 22 but the bulls purchased this dip aggressively as seen from the long tail on the day’s candlestick.

The LUNA/USDT pair could attempt a pullback to the moving averages and then to the downtrend line of the channel. If bulls propel the price above the channel, the pair could rise toward $87.90 and later to $93.81.

Contrary to this assumption, if the price turns down from the current level or the moving averages, it will suggest that bears are selling on every minor rally. The pair could then retest the support line of the channel. A break below this support could accelerate the selling.

The 4-hour chart shows that the relief rally has reached the 20-EMA which is an important level to watch out for. The marginally downsloping 20-EMA and RSI just below the midpoint indicate a minor advantage to bears.

The ATOM/USDT pair has rebounded sharply off the 200-day SMA, suggesting that bulls are defending this level aggressively. The buyers will now try to push the price to the 20-day EMA ($35.91).

A break and close above this level could indicate that the correction may be over. The pair could then rally to the critical overhead resistance at $44.80.

This positive view will invalidate if the price turns down from the current level or the 20-day EMA and breaks below the 200-day SMA. Such a move could open the door for a possible drop to $20.

The 4-hour chart shows a double top formation, which completed on a break and close below $34. This topping out pattern has a target objective of $23.20 and the pair plunged to an intraday low at $27.31.

The relief rally from the lower levels is facing stiff resistance at the breakdown level at $34. If bulls push and sustain the price above this resistance, the pair could rise to the downtrend line. A break and close above this line will suggest a possible change in trend.

Related: How to pick or analyze altcoins?

Alchemy Pay (ACH) aims to bridge the gap between the crypto and fiat world by achieving seamless transactions between the two economies. Its recent partnership with MEXC Global will provide users with several payment options in Japan, Korea, and Indonesia.

A new partnership with NIUM will help Alchemy Pay lower costs for its clients in the 190+ countries where NIUM operates. NIUM’s licences in financially important regions such as the United Kingdom, Europe, U.S., Singapore, Hong Kong and Australia, will assist Alchemy Pay in penetrating these markets.

The network added support to Dai after a new collaboration with MakerDAO and also announced a partnership with IoTeX (IOTX). The integration enables IOTX to be used for business-to-business (B2B) or customer-to-business (C2B) payments in several parts of the world.

The project’s multiple partnerships have helped it to expand its support to more than 70 countries with 300 payment channels reaching more than 2 million merchants. ACH was also listed on Binance exchange on Jan. 10, making it easier for a larger pool of traders to transact the coin

ACH has been steadily declining since hitting an all-time high in August 2021. This suggests that traders have been booking profits on rallies.

THE ACH/USDT pair plunged below the strong support zone at $0.056 to $0.045 on Jan. 21, but a minor positive is that bears could not build upon this advantage. This indicates strong demand at lower levels.

If buyers push the price back above the overhead zone, several aggressive bears who may have sold recently may get trapped. This could result in a short squeeze which may push the pair to the downtrend line of the descending triangle. The bullish momentum could pick up on a break and close above the triangle.

On the other hand, if the price turns down from the overhead zone, it will suggest a change in sentiment from buy on dips to sell on rallies. The bears will then attempt to sink the price below $0.03 and resume the downtrend.

Fantom (FTM) broke above the $3.17 overhead resistance on Jan. 16 but could not clear the next hurdle at $3.48. This may have attracted profit-booking by traders, resulting in a sharp pullback.

The bulls will now try to push and sustain the price above the 20-day EMA. If they manage to do that, the pair could retest the overhead zone.

Conversely, if the price turns down from the current level or the 20-day EMA, it will suggest that traders are selling on rallies. The bears will then try to pull the pair below the 200-day SMA.

The 4-hour chart shows the formation of a head-and-shoulders pattern, which had a target objective at $1.70. The pair bounced from $1.77 and has reached the 20-EMA, which is acting as a stiff resistance.

If the price turns down from the current level, the bears will try to resume the downtrend and sink the pair to $1.30. Conversely, if the price rises and sustains above the 20-EMA, the pair could rally to the neckline of the bearish setup and then rise to $3.00.

UNUS SED LEO (LEO) plunged and closed below the ascending channel pattern on Jan.21 but a minor positive is that bulls bought at lower levels and are attempting to push the price back above the moving averages.

If they succeed, the LEO/USD pair could retest the overhead resistance at $3.92. A break and close above this level could indicate the resumption of the uptrend. The pair could then rise to the resistance line of the channel.

If bulls thrust the price above the channel, the pair could pick up momentum. This positive view will invalidate if the price turns down from the current level and breaks below $3.37. The pair could then drop to the strong support at the 200-day SMA ($3.19).

The 4-hour chart shows that bulls repeatedly attempted to push and sustain the price above the overhead resistance at $3.85 but failed. This may have attracted profit-booking, resulting in a decline to the strong support at $3.40.

The sharp rebound off $3.40 indicates aggressive buying at the level. The bulls will now try to push the price to $3.85. If bulls clear the overhead zone between $3.85 to $3.92, the uptrend could resume. This positive view will invalidate on a break and close below $3.40.

The views and opinions expressed here are solely those of the author and do not necessarily reflect the views of Cointelegraph. Every investment and trading move involves risk, you should conduct your own research when making a decision.

*Disclaimer: ACH is a featured cryptocurrency from one of Cointelegraph’s sponsors, its inclusion did not affect this price analysis.