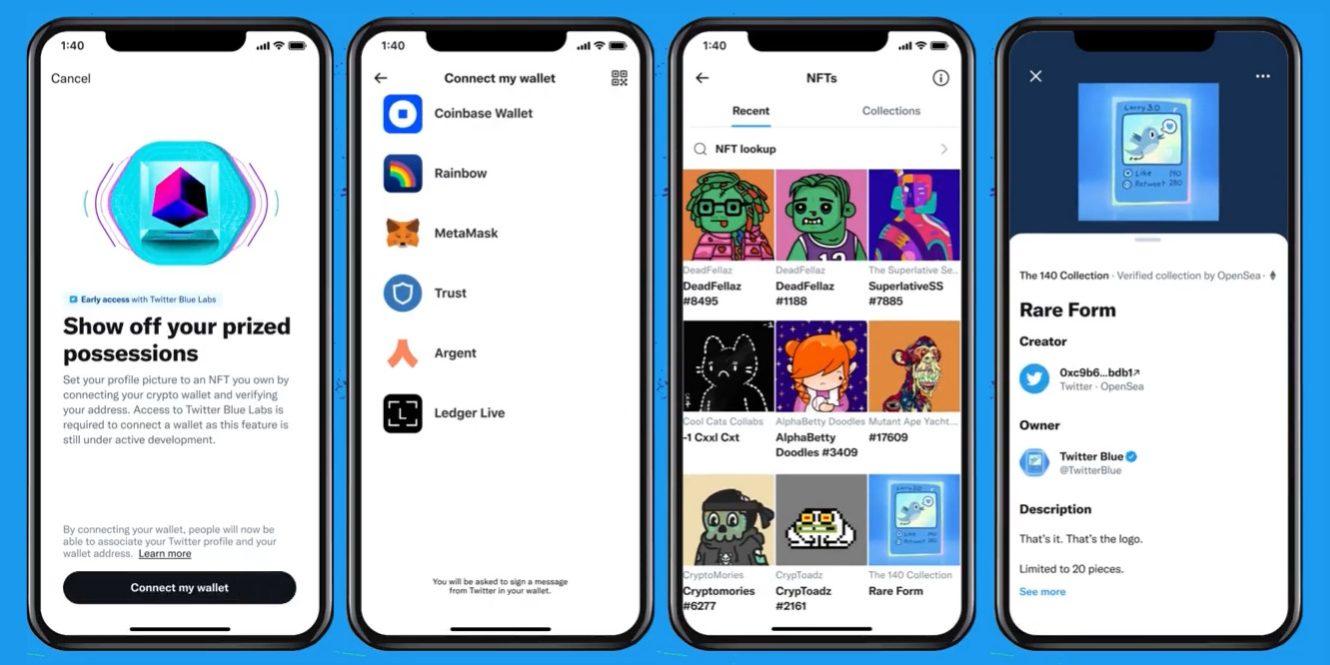 Twitter has introduced a new feature that will allow select users to set their profile picture to any non-fungible token that they own.

The feature is available to iOS users who pay for Twitter Blue’s subscription service at a cost of $2.99 per month. That service was initially rolled out over the course of 2021 to offer ad-free news and an “undo” button; it also offers experimental features.

Those who use NFTs as their profile picture will be set apart visually, as NFT images will be shown in a hexagon frame instead of Twitter’s usual circular border.

Several different cryptocurrency wallets are compatible with the new feature, most notably Coinbase Wallet and Metamask. Other wallets such as Rainbow, Arget, and the Binance-owned Trust Wallet are also supported. Ledger Live, produced by the hardware wallet company Ledger, is also supported by Twitter’s NFT feature.

Though only Twitter Blue users can use the feature, it appears that other users will be able to visit a profile and look up details about the NFT image, such as the blockchain address of the NFT’s creator and the description of the non-fungible token.

The feature has been under development since at least November 2021, when Twitter employee Alessandro Paluzzi shared a work-in-progress picture with the public.

Twitter was one of the first major companies to join in the NFT trend in June 2021, when it minted and gave away 140 collectible tokens for free.

Twitter’s head of product, Esther Crawford, told The Wall Street Journal this week that the company aims to “support this growing interest among creators to use decentralized apps to manage virtual goods and currencies.”

The new feature is promising because it can serve as a form of “proof-of-ownership” in conjunction with Twitter’s Verified User or “blue check” system. Users can prove that they own a particular piece of crypto art alongside their real identity.

The feature will also help make NFTs more familiar to the public thanks to Twitter’s sizable user base, which currently amounts to 211 million daily active users. Crawford noted that many people’s “first experience of NFTs” will be on the site.

It is unclear if and when the feature will be rolled out beyond Twitter Blue. However, because the feature is offered through early access to Twitter Blue Labs, it seems likely that NFT profile pictures will soon be made more widely available.

While extended support for NFT features has been received well within the cryptocurrency community, the announcement has also seen immediate backlash.

NFTs in recent months have become highly controversial. Some critics highlight the ecological cost of blockchain mining; others merely consider the trend a fad powered by overpriced artwork and undeserved hype.

Others still are concerned about how practical the feature is for verification. They have noted that the hexagon shape that seems to separate NFTs from non-NFT profiles can easily be faked by clipping the sides of an image. It is unclear if Twitter will introduce stronger verification symbols in the future.

The immediate backlash has even led to practical opposition to the feature. One popular third-party Twitter reader, TweetDeck, has added an option that allows users to automatically mute users that use NFT profile pictures.

Despite these controversies, Twitter remains highly devoted to cryptocurrency. In November 2021, it announced Twitter Crypto, a new division devoted to crypto development. It also introduced Bitcoin tipping in September 2021.

The company is also working on Bluesky, a social media decentralization effort that has been ongoing since 2019. Though not directly related to cryptocurrency and blockchain, the effort is led by and has contributions from blockchain developers.

Twitter also announced this week that it seeks to hire a new head of product for its crypto efforts. The new hire could explore areas such as DAOs and membership tokens.

The company’s cryptocurrency pursuits could also change direction with the departure of former CEO Jack Dorsey last November. Dorsey was a vocal crypto advocate during his time at Twitter. He continues to head Block (formerly Square), a digital payments company with a significant focus on Bitcoin.