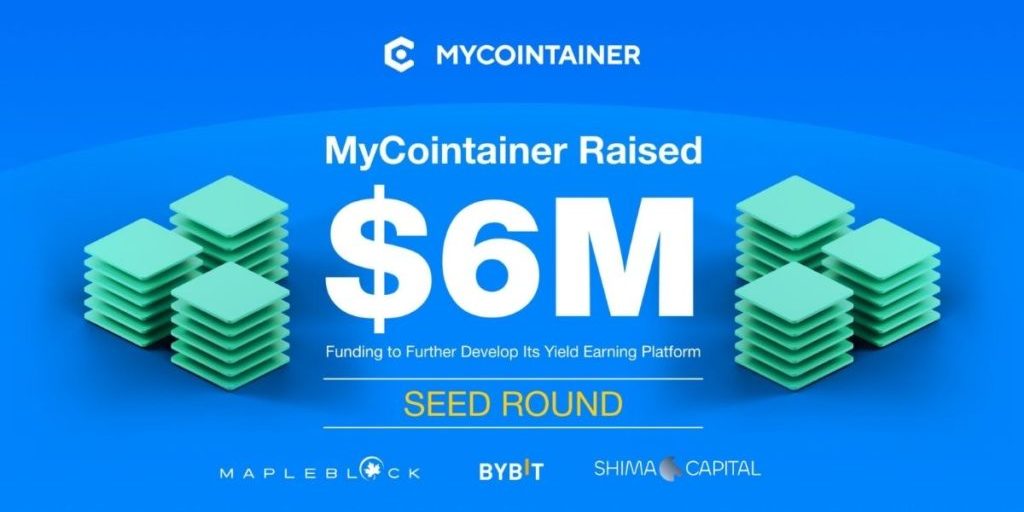 MyCointainer, a platform for easy yield staking, is happy to announce the successful completion of its Seed funding round that raised $6 million from VCs and Angel investors.

As per the announcement, the round was led by Mapleblock and co-lead by Shima Capital and Bybit. The event saw the participation of rich portfolios including Circle, ConsenSys, Algorand, dY/dX, Mina, Ankr Casper Labs, Enjin Near, Polkadot, 1inch, CoinList, and Polygon.

Notably, the new funding will be used to develop MyCointainer’s yield earning platform. MyCointainer has been working on improving its current B2B products and hopes to expand its reach in Europe, the Middle East, Asia, and other parts of the world. In addition, the funding will also help the platform hire more professionals to join its expert team.

MyCointainer is a platform created to enable customers to stake cryptocurrencies and tokens without undergoing the numerous challenges that come with the process. The staking feature is designed to reward users daily, earning passive income on their assets. In addition, users can earn directly from their wallets through the MyCointainer delegations feature. MyCointainer works similarly to a digital piggy bank.

Through the platform, users can stake with as little as 1 EUR. Users also benefit from picking from more than 100 digital assets, including Cardano, Polkadot, and Elrond. On average, the yearly rewards on the platform are about 15%. However, some assets on the platform generate more profits than others. These include Polygon, NEM, Cartesi, Cardano, and Synthetic.

MyCointainer’s goal is to “enable easy access to various rewarding crypto mechanisms for all. We want everyone to benefit from a changing financial landscape equally and speed up the global advent of crypto adoption.”

Launched in 2018 by Bartosz Pozniak, MyCointainer is run by a team of 25 individuals who are at the top of their fields. Initially, the platform began as a self-funding company that generated revenue. Since its launch, the platform has generated over $3 million in rewards to over 110 000 users globally.

Last year in November, MyCointainer partnered up with Elrond and Maiar to enable the trading of BTC/EGLD and EUR/EGLD pairs. The partnership also sought to develop a simple proof of stake (PoS) mechanism. Other strategic partnerships include one with Avalanche Labs, Waves&Cosmos and Cypto.com