The president, the fast-food giant, and the sus crypto token 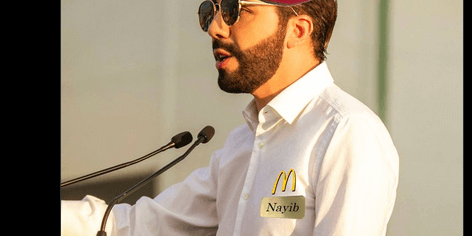 There’s never a dull moment in crypto. Peak to trough total market cap outflows, since late December’s all-time high of $2.4 trillion, come in at -$900 billion or -38%.

Although we’ve seen some reprieve since Monday’s bottoming, it’s still too soon to say the worst is over. Especially as investor sentiment across the board remains jittery.

During peak fear, the McDonald’s meme re-surfaced. But instead of staying silent, the fast-food giant joins in with the banter, triggering a series of events, including Elon Musk’s involvement, leading to the creation of Grimace Coin.

In times of trouble, memes are always there for some light relief. What’s even funnier is when a nation-state leader memes about himself.

That’s precisely what El Salvador’s President Bukele did over the weekend, as he tweeted a picture of himself in a McDonald’s uniform.

The origin of the McDonald’s meme stems from the longstanding gag that, following a market crash, crypto bros now need to get a real job.

Since tweeting this image, President Bukele doubled down by releasing a Twitter poll asking followers if he should quit McDonald’s and open a rival Bitcoin burger joint. To which 86% of respondents said yes.

Building on this momentum, President Bukele took the opportunity to fire back at critics of El Salvador buying the dip. Adding, McDonald’s workers should invest their pay in Bitcoin.

So invest a piece of your McDonald’s paycheck in #Bitcoin

Now go back to flip more burgers you lazy fvçk!

Keen to get in on this, Tesla CEO Elon Musk chimed in by saying he would publically eat a Happy Meal if McDonald’s accepts Dogecoin as a payment method.

The tweet garnered 26,500 replies, including McDonald’s, who cheekily said, “only if Tesla accepts grimacecoin.”

Grimace is a McDonald’s character that first appeared in 1971. He was initially called “Evil Grimace” and was shown stealing milkshakes. But over time, marketers changed his nature to “good.”

Around an hour after McDonald’s posted this reply, an ERC-20 Grimace Coin appeared on Ethereum and again in the early hours of Wednesday as a BEP-20 on the Binance Smart Chain.

Following a spike to just below $0.008, ERC-20 Grimace Coin dipped below its opening price. An upward trend followed, but currently, bears are fighting back.

Similarly, BEP-20 Grimace Coin showed a huge spike, to $0.0002786, before selling off hard. Activity has tailed off significantly since the sell-off.

It goes without saying that neither of these tokens is affiliated with McDonald’s. And the likely outcome for anyone brave enough to trade their ETH or BNB is a rug pull.

The post The president, the fast-food giant, and the sus crypto token appeared first on CryptoSlate.