Bill Introduced To Make Bitcoin A Legal Tender In Arizona 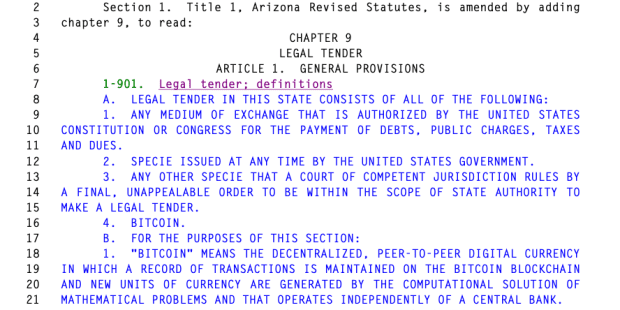 Senator Wendy Rogers introduced a bill to make bitcoin a lawful currency in the U.S. state of Arizona.

Senator Wendy Rogers has introduced a bill proposing to make bitcoin a legal tender in the U.S. state of Arizona.

The bill seeks to add bitcoin to the list of instruments considered legal tender in Arizona and make the peer-to-peer digital currency a lawful medium of exchange there, enabling citizens to pay debts, public charges, taxes and dues with BTC.

If enacted, all financial transactions that are currently done in U.S. dollars could most likely be done in bitcoin in the state, including payments and payouts. Citizens could opt to receive their salaries directly in bitcoin and companies would have complete freedom as to how and when they could use bitcoin.

The bill says “Bitcoin” specifically rather than cryptocurrency in general, and doesn’t mention any other digital currency besides the first and only P2P system that managed to trustlessly solve the double-spending problem of digital cash.

Arizona could become the first U.S. state to recognize bitcoin as legal tender if the bill moves forward and gets approved.

El Salvador in September became the first country in the world to make bitcoin a lawful currency after President Nayib Bukele presented a bill that would equate BTC to U.S. dollars, the other currency with the status of legal tender in the Central American country.

Allowing the freedom to transact with and store wealth in an incorruptible form of money that is also more sound than the dollar is a net positive to the state of Arizona and its citizens.

Similar intentions are brewing in Texas. Governor candidate Huffines said he will try and make bitcoin legal tender in his state if he wins the election, as he says “Texas must stop the federal government from shutting down the industry and discriminating against Bitcoin holders.”