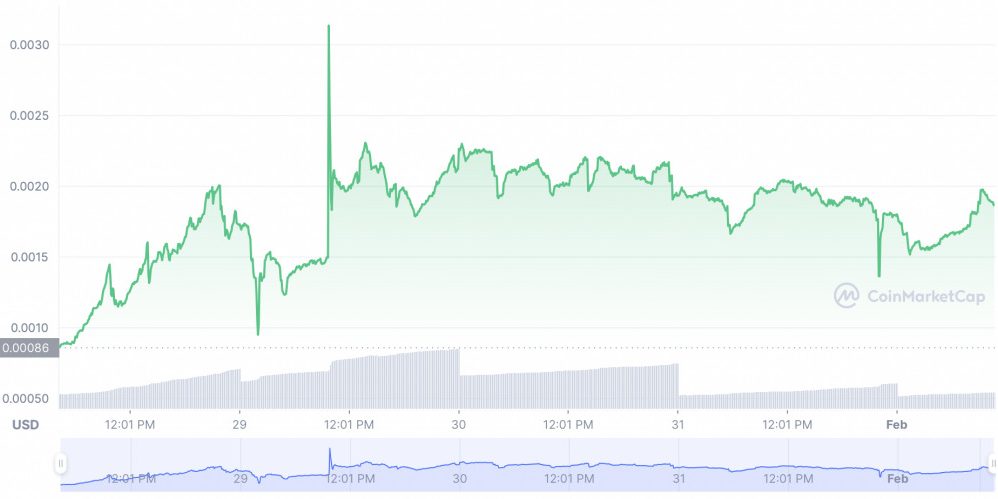 The cryptocurrency market has regathered some steam after a bad few weeks. At $1.85 trillion, its total cap has risen by 6% in the past 24 hours. Major coins have risen by similar amounts in the same timeframe, with ethereum (ETH) jumping by an impressive 10%. However, some of the biggest gains in the past day and week have been posted by smaller altcoins. Accordingly, we’ve compiled the 5 best cryptocurrency to buy on low prices right now. This covers coins worth $100 or less.

Launched at the end of last month, LBLOCK is a new altcoin granting holders entry into the Lucky Block lottery. Running on Binance Smart Chain, it distributes 70% of its jackpot fund to randomly selected winners, while 10% of the fund is shared among all coin holders (another 10% goes to charity, while the remaining 10% is set aside for marketing purposes).

Its first lottery will commence on March 31st, 2022. From then on it will have regular draws, with holders receiving their share of the jackpot fund without having to purchase tickets.

Investors can now trade LBLOCK via DeFi protocol PancakeSwap. It is tradable with BNB, with lottery payouts being made in LBLOCK.

LUNA’s technical indicators show a strong recovery may be in the works. Its relative strength index (in purple above) has jumped from just under 30 to just over 60 in a couple of days. Meanwhile, its 30-day moving average (in red) has stopped falling and is now beginning to rise. If it overtakes its 200-day average (in blue) in the next few days, we could see a strong rally.

And LUNA’s prospects of a strong rally are very good. Terra, its native platform, burns the altcoin whenever minting new stablecoins (such as terraUSD), while it has a fixed supply of 1 billion. So with the supply of terraUSD (UST) increasing by around 300% in the past three months, LUNA’s circulating supply has decreased significantly. On top of this, the use of LUNA for staking has also accelerated this decline.

~70% of $LUNA‘s circulating supply is staked and that’s without inflationary tokenomics.

All yield paid out to $LUNA stakers is paid out from network transaction fees, *no new $LUNA issuance*. This is a huge differentiator from nearly all other chains.

In the long run, a falling supply will likely push LUNA’s price upwards. And with the Terra ecosystem growing to $13.67 billion in TVL, LUNA has a bright future ahead of it. This is why it’s one of our 5 best cryptocurrency to buy on low prices.

GALA is also down by 75% since reaching a record high of $0.824837 in November. Its technicals suggest that it may have turned a corner in the long journey to recovering such lost ground. Its RSI has neared 70, while its 30-day average is on the cusp of forming a golden cross with its 200-day. This could signal a breakout.

GALA is the native token of the of Gala Games platform, it can still have a very good 2022. Running on the Ethereum blockchain, Gala enables developers to build blockchain- and NFT-based games. Towards the end of last year, it announced plans to spend around $1 billion on the development of its ecosystem. This indicates that it could grow considerably this year.

1.) We are built differently and we will always and consistently drive to level up…always.
2.) We announced that we are going to deploy $1b USD into game development in Korea. https://t.co/nvQEYgl3kQ

According to Gala Games’ website, 1.3 million active users and has now racked up around 26,000 NFT sales. And with the company launching a new, $100m development fund in December, its prospects of expanding look even better this year.

MANA’s indicators show that it has begun something of a rebound, having fallen by 52% since its ATH of $5.85 in November. Its 30-day average has formed a golden cross, having overtaken its 200-day average. Similarly, its RSI is hovering around 60, having passed 70 yesterday. This signals some very strong momentum.

As with GALA, MANA has the fundamentals to suggest very good growth this year. Not least when its 2021 was so good, with Facebook sparking a metaverse mania from November onwards.

2021 was the Year of the Metaverse. No one won bigger than @decentraland.

…and it’s just getting started. https://t.co/JbfkhYytyJ

Aside from riding hype for the metaverse, Decentraland has also benefitted from a growing number of partnerships and link-ups. Most notably, Samsung started this year by announcing the launch of its own store on Decentraland.

Samsung’s arrival in Decentraland is a massive seal of approval, and shows why MANA is one of our 5 best cryptocurrency to buy on low prices.

DOT’s chart shows that it has suffered for long enough. Fortunately, its 30-day average has not only stabilised, but has also just overtaken its 200-day. At the same time, its RSI is at 60, showing good strength.

DOT is long overdue a big rally. Its native platform, Polkadot, famously initiated auctions at the end of last year for slots on its network. These are still ongoing, with DeFi platform Centrifuge recently winning the eighth slot.

Centrifuge will be onboarded at block #9,388,800 [roughly March 11,2022] at the beginning of lease 7 with the other winners from auctions 6-11. Over 15K network stakeholders locked up DOT in favor! pic.twitter.com/pGGLRWTPpz

Such auctions are significant because they’re giving rise to a Polkadot DeFi ecosystem. This means more activity on Polkadot and more demand for DOT. In other words, the chances of DOT experiencing a rally increase with every new parachain added to the Polkadot network.

Indeed, months after virtual non-existence, Polkadot has finally registered a total value locked in. At the moment, this sum is incredibly modest, but it shows that the network is indeed finally growing, after months of hype.

XRP is now the eighth-biggest cryptocurrency in terms of market cap, and it remains something of a gamble. This is because of Ripple’s ongoing case with the Securities and Exchange Commission, which currently remains in the discovery period.

The outcome of this case is uncertain, although Ripple remains confident that it will secure a favourable settlement. Most notably, it recently bought back its own shares at a valuation of $15bn, which it had sold in its 2019 Series C round. This could indicate that it’s preparing for an IPO, once the case concludes, as stated by CEO Brad Garlinghouse back in 2021.

It also seems that the wider cryptocurrency community is becoming increasingly convinced Ripple will do well with the case. Evidence continues to emerge which makes its case look stronger and the SEC’s look weaker, including a video in which former SEC chair Jay Clayton appears to describe the view that ethereum isn’t a security as official SEC policy.

The SEC case against Ripple is over.

However, traders looking to take a punt on Ripple emerging unscathed from the case will have to wait a while longer. A recent ruling extended the discovery period until March, so we may not see a settlement until the middle of the year.

There’s no silver lining in this ruling granting the SEC extensions of time – even if the order on the Motion for Reconsideration is eventually upheld.

Now discovery won’t conclude until March at the earliest.

Still, if Ripple does gain a good settlement, there’s little doubt that XRP will surge overnight. This is why it’s one of our 5 best cryptocurrency to buy on low prices.