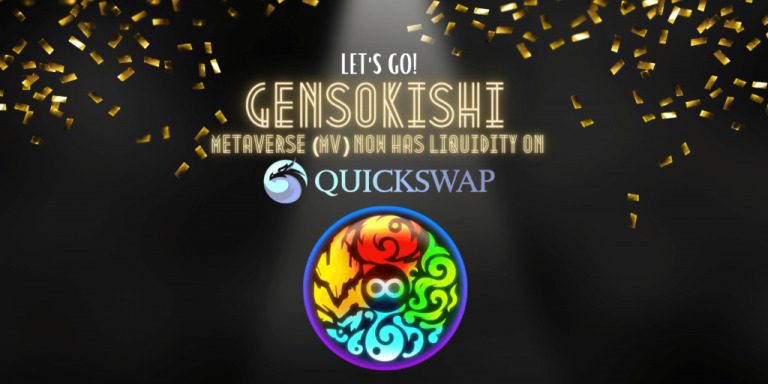 PRESS RELEASE. GensoKishi is pleased to announce that the MV (Metaverse) token has been listed on QuickSwap (a decentralized exchange) at 10:00 UTC on January 29, 2022.

GENSOKISHI Online, is a GameFi project that evolves from an award winning Nintendo Switch/PS4 game called “Elemental Knights”, that has been vigorously played for 13 years and has accumulated a total of 8 million downloads worldwide. GensoKishi already has a 3DMMORPG game with active users, with a fully-functioning 3D metaverse, that simultaneously connects users from around the world, be it smartphones, PCs, or video game consoles.

What is QuickSwap (Decentralized Exchange/DEX)?

In addition, instead of traders exchanging currencies with each other, they let smart contracts act as intermediaries to complete trading, resulting in faster order processing.

About the MV tokens to be listed on QuickSwap

What is the MV (Metaverse) Token?

Very soon, users will be able to stake MV to earn FTs called ROND, which is the in-game stable coin that constitutes the in-game economy (ROND will be listed soon). Other than this, users with more MV will be provided a certain advantage when participating in NFT auctions for LAND, in-game items and skins.

The staking function for “MV”on the official website is scheduled to be released on February 7, 2022. For more details, please refer to the “MV Staking DETAILS Revealed” article.

The Gensokishi Online Project will continue to provide blockchain game fans with the latest information on the project.