Are Users Pivoting to DeFi Trading? A Closer Look Into CEX Vs. DEX Numbers 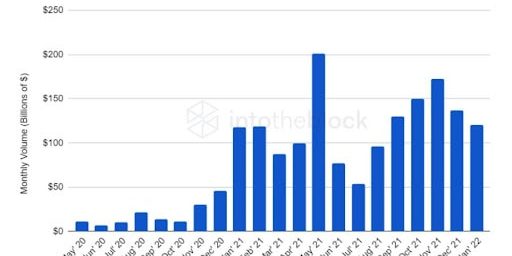 Bitcoin started out as a technological experiment more than a decade ago. Since then, the global financial markets have undergone a tremendous shift. At the center of the digital currency revolution is blockchain technology which gave rise to the first-ever smart contract platform, Ethereum.

Over the past years, the Ethereum network has become a significant driver offering users the ability to interact in a truly decentralized manner. Decentralized exchanges or DEXs are part of the growing suite of protocols on the Ethereum blockchain that have garnered huge traction. But due to the first-mover advantage, among other things, CEXs or centralized exchanges have continued to perform better despite a flurry of DEXs into the scene.

The battle between the two became more pronounced in 2021 with the advent of other more advanced smart contract platforms. But there’s no denying that both centralized cryptocurrency exchanges as well their decentralized counterparts are one of the most integral vehicles for transacting.

Coinbase and the CEX Narrative

Coinbase, for one, has been a force to reckon with. It is one of the world’s most reputed consumer-facing centralized cryptocurrency exchanges. The company made history after going public in April 2021 when it became the first in the industry to be listed on Nasdaq. Founded exactly ten years ago, Coinbase is often heralded as the biggest crypto exchange in the United States. Its market cap stands near $42.55 billion.

Coinbase saw real growth in 2021, thanks to the bull run in addition to other milestones. Gauging further, IntoTheBlock observed that the exchange reached its highest monthly volume in May 2021, processing around $200 billion. Despite the post-November slump, in tandem with a slew of market corrections, Coinbase has experienced notable growth in the past year and a half.

To put things into perspective, the veteran US exchange processed around $11 billion in transaction volume in May 2020. By the end of January 2022, the exchange’s monthly transaction volume stood at $120 billion, meaning an increase of 1,000% in a period of just a year and a half. This also demonstrates that – the more volume of transactions being processed, the higher the revenue to the centralized exchange and their shareholders. This is because the crypto trading platform charges a fee for every transaction being processed.

It was in the year 2016 that Ethereum creator Vitalik Buterin first proposed the idea of a decentralized exchange that would engage in an on-chain automated market maker with certain features. Former Siemens engineer Hayden Adams turned the concept into a functional product a year later that led to the creation of Uniswap. Today, it is known as one of the first DEXs created on the Ethereum network.

Uniswap’s V1 was launched in 2018 and slowly managed to capture the lion’s share in the market in terms of transaction processed. The following iterations – V2 and V3 – focused on enhancing various aspects of the DEX along the way. Currently, Uniswap’s combined protocols stand firm as one of the top decentralized exchanges in the space. The protocol’s native governance token, UNI, has a market cap of around $7 billion at the time of this writing.

Being the DEX leader, Uniswap’s transaction volume can help understand the utilization of the protocol and, more broadly – gauge DeFi adoption.

Uniswap has smashed all the previous records to hit an all-time high transaction volume in December 2021. The stats show that the DEX processed around $82 billion between its V2 and V3 versions.

It is important to note that Uniswap and other decentralized exchanges have, time and again, challenged the established venues such as Coinbase. Upon analyzing the transaction volume, IntoTheBlock’s indicator found that Uniswap has managed to capture a significant market share with respect to exchange services even though it started operating six years after Coinbase.

Users are slowly starting to move from CEXs to DEXs. The latter’s appeal is not limited to factors such as privacy and security. Yield opportunities are yet another driver.

Centralized exchanges charge a fee on trades through their platform, which serves as revenue to keep the business afloat. Decentralized exchanges, on the other hand, have liquidity providers (LPs) to keep their doors open. Anyone can become an LP just by depositing into one of the DEXs’ permissionless pools. In this way, LPs can automatically start earning swap fees charged to the users trading through it. In other words, the fees charged go to the CEX for providing the service, while DEX’s revenue (swap fees) are allocated to the liquidity providers.

Coinbase typically charges its users 0.5% of the amount traded. Most pools on Uniswap charge 0.3%. Having said that, it is important to take into account that certain pools on the DEX can go high as 1% and as low as 0.01%. ITB’s above indicator gives a clear insight into the fees generated by both platforms.

In May 2021, Coinbase’s fees climbed to a record high of almost $1 billion. Uniswap, on the other hand, recorded its ATH in December 2021, when it generated nearly $246 million in monthly fees. These were later on distributed to the liquidity providers, meaning, Uniswap was able to allocate $246 million in swap fees during the month.

To cater to the rising needs and demands, the decentralized exchanges have continued to innovate and ramp up the services for their users.

Recent DeFi developments include the implementation of 0.01% fee pools for stablecoin trading on Uniswap’s platform and the continued growth and adoption of the 0.05% fee pools, which currently are the top-ranked pools in Uniswap by trading volume.

The deployment of Uniswap on emerging rollup solutions such as Arbitrum and Optimism has also bolstered its already growing traction by minimizing the cost of gas fees for transactions. This coupled with low fee pools, gives DEXes the ability to foray into a competitive field for the cheapest possible transaction in the space. As DeFi and DEXes keep ramping up to deliver the best possible service for the flourishing userbase while keeping the unique characteristics that make it up, the industry is likely to continue to see user migration and adoption into this space.

The above-discussed trends and user migrations provide a better picture of where users are pivoting. The DeFi ecosystem is accelerating at a pace never seen before; hence keeping a close watch is important.

DEXs offer plenty of opportunities than their centralized counterparts to get involved with the market and generate yield on user assets. DeFi flippening is real, and DEX is where most development is taking place.

However, risks associated with it and DEXs in specific, such as high gas prices or impermanent loss in the case of Liquidity Providers, should not be ignored.