Publicly-Traded Bitcoin Miners Holdings, Hash Rates Going Up And To The Right 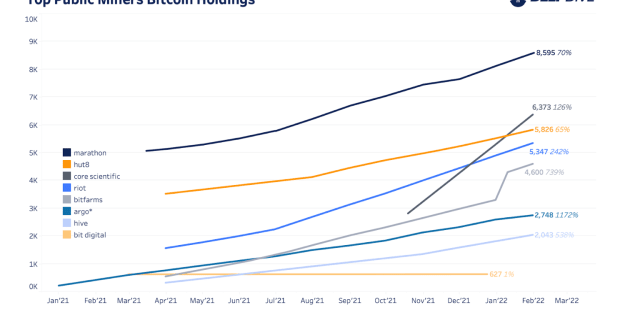 January once again saw the bitcoin holdings and hash rates of publicly-traded bitcoin miners go “up and to the right.”

January was yet another positive “up and to the right” type of month for the top publicly-traded miners across their bitcoin holdings and their hash rate. This group of eight miners now hold 36,159 bitcoin, up 12.35% from December 2021. In the charts below, we collect reported figures from company financials, monthly production updates, investor presentations, and press releases when available.

Like bitcoin holdings, hash rate capacity continues to grow across all miners. The largest month-over-month change in hash rate came from Core Scientific increasing to 7.5 EH/s from 6.6 EH/s in December. Current hash rate is 2.84x from the 2.64 EH/s they had in October 2021. They now lead public bitcoin miners in hash rate capacity.

That hash rate comprises a 75,000-machine fleet of top-tier ASICs that produced over 1,000 bitcoin for the month. In 2022, Core Scientific has approximately 90,000 more machines under contract for delivery.

Trading under the ticker, $CORZ, Core Scientific went public last month on the Nasdaq. It currently has a market capitalization of $3.6 billion which makes it the largest public miner on the market. Marathon’s market capitalization is currently $2.84 billion. As most mining stocks are, Core Scientific is highly correlated with bitcoin with a 14-day rolling correlation coefficient of 0.74.