Best Play to Earn Crypto Games That Will Make You Rich 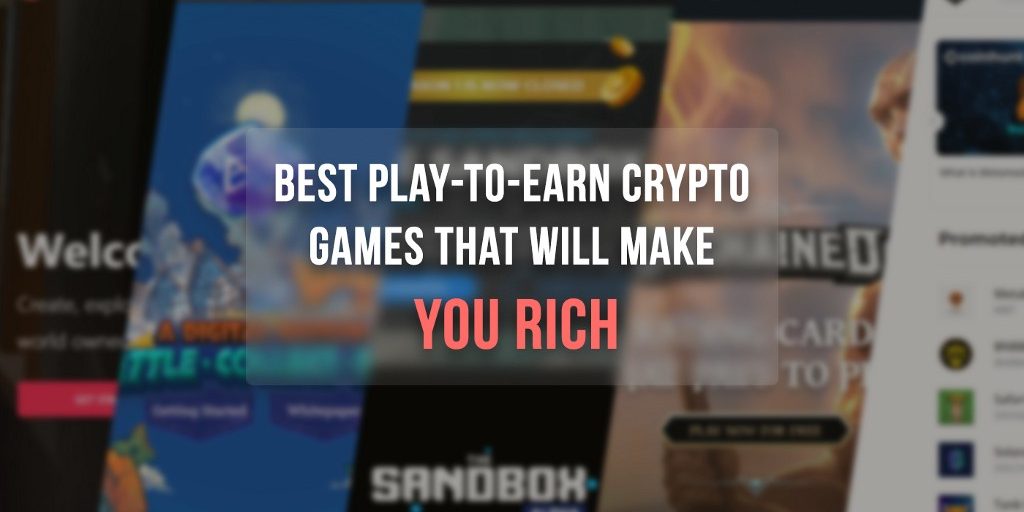 Play to earn is fueling the continued growth of blockchain gaming

We’ve all dreamt of making a fortune by playing video games at some point in our lives. With the launch of play to earn crypto games, our childhood dreams have suddenly come true. Play-to-earn NFT games have grown in popularity in the gaming business since their launch.

Play-to-earn cryptocurrency games have sprung onto the market, revolutionising gaming business models. Here’s how they function and where the value comes from for investors.

We’ll go through the top five play-to-earn cryptocurrency games that will help you make a passive income that you can’t afford to miss.

What Are Play to Earn Crypto Games?

Play-to-earn crypto games provide players with a variety of rewards. Most games will pay out rewards in a mix of NFTs and in-game virtual currency, which can be bought or sold to other players or traders within the game or to outside traders. In rare cases, players can earn renowned currencies for their participation.

The ability to earn non-fungible tokens (NFTs) and cryptocurrencies and trade them on a marketplace is, in essence, one of the main selling aspects of play-to-earn crypto games. Axie Infinity, Zedd Run, and Gods Unchained are among the most popular P2E games in 2022. Coin Hunt World rewards players with Bitcoin and Ethereum tokens rather than the game’s cryptocurrency.

Several emerging countries like India, Vietnam, and the Philippines have made passive income while playing video games. Blockchain-based games such as Axie Infinity payout in Bitcoin to gamers. They can earn anywhere from Philippine peso 20,000 (₹29,316) to Philippine peso 50,000 (₹73,290) every month.

With the introduction of CryptoKitties in 2017, such play-to-earn (P2E) crypto games initially gained popularity. However, the trend stalled. In 2018, Axie Infinity, the most popular P2E, was introduced. It grew in popularity during lockdowns in developing nations, where many people worked from home or lost their jobs and were looking for new ones.

There are already so many games in crypto that it is challenging to keep track of them all. Some are entertaining, and a few might be entertaining while also allowing players to earn a few rupees.

How Does Play to Earn Crypto Games Work?

Game makers have quickly adopted the play-to-learn approach. Many games, such as Axie Infinity, Gods Unchained, and Splinterlands, have been rising and gaining popularity. These (and other) P2E games mainly rely on blockchain technology to maintain their ecosystem and provide users with access to in-game built-in tokens that have worth outside of the game. Cryptocurrencies (or digital currencies), NFTs, and decentralized markets have made this possible.

Essentially, any action you perform in Play to Earn games may be rewarded, whether it’s completing tasks, waging battles, assisting in resolving an issue, or breeding new species. The game’s elements take the shape of NFT. For example, if you want to breed a new species or create a new avatar, you may easily create a new token and sell/trade it in the marketplace.

The most significant advantage of NFTs is that you can easily swap them for crypto, which can then trade for real currency through exchanges. Because transactions in the realm of play earn the form of blockchain, the validity and ownership of digital assets in the game can always be confirmed.

We are all aware of the impact of demonetization in India. The ₹500 and ₹1000 notes were decommissioned overnight. That was the start of the rise of digital payment systems and payment processor enterprises. At the same time, cryptocurrency usage in India began to rise.

Crypto acceptance in India is increasing, but it is still confronted with obstacles, as the Indian government has announced the launch of its digital currency. We have listed five play-to-earn crypto games to create passive income that you can’t afford to miss.

Let’s begin with the best games on the list:

Axie Infinity is a blockchain-based trading and warfare game in which players own and operate the firm’s share. Axie Infinity is a game that allows players to collect, breed, grow, combat, and trade Axies, which are token-based creatures. Popular games like Pokémon and Tamagotchi influence the development of Axie Infinity.

Based on the overall price movement since the beginning of the year, the Axie Infinity (AXS) price will rise again because it has a bright future and will attain new record values in the years ahead, implying a bullish AXS price prediction on the chart.

If you’re wondering where to buy Axie Infinity in India, BuyUcoin is one of the best cryptocurrency exchanges for trading Axie Infinity crypto.

The rise in SAND, the native cryptocurrency of the blockchain-based virtual world ‘The Sandbox,’ gained traction when a tweet from Adidas, a German sports goods maker, suggested announcing a relationship between the two companies.

The gaming industry represents a large unmet possibility for blockchain adoption. The Sandbox aims to disrupt the business by building a universe where users may create and collect blockchain-based commodities, and it carves out its place in the worldwide gaming market.

If you’re wondering where to buy Sand in India, BuyUcoin is one of the best cryptocurrency exchanges for trading in The Sandbox.

Gods Unchained is a well-known card game with the added benefit of earning some Crypto and NFTs. You must acquire card packs by leveling up and meeting specific conditions (rank and win on max games). Some cards are for sale except for the “special packs,” but most are not. When the forge is operational, you will be able to combine two “common skin” cards to make a sellable one. You may also win cryptocurrency once a week by claiming from the Blessing of the Gods website.

Decentraland is a 3D virtual reality crypto game that uses the Ethereum network. Players may explore regions, create unique avatars and materials, and have extraordinary experiences.

Additionally, gamers may use the MANA coin as an in-game token to sell and purchase products and engage in enjoyable social activities.

Moving closer to Metaverse, Decentraland includes ultra-high-quality visuals and gameplay based on VR experiences to satisfy life beyond reality. Along with the NFT Marketplace, players have the option of trading.

If you’re wondering where to buy Decentraland in India, BuyUcoin is one of the best cryptocurrency exchanges for trading in Decentraland.

Coin Hunt World is a free-to-play/pay-to-win smartphone game that allows you to earn cryptocurrency while exploring your area. Unlock prizes by discovering keys. Play alone or as part of a group!” (On Android, it is available in the United States, Canada, and the United Kingdom; on iOS, it is presently an invite-only beta.)

Players seek their real-world surroundings for keys, which they then use to access vaults. A trivia question is shown to the user when a vault is unlocked. The user gets awarded if the questions are accurately answered within the time limit.

Users are now paid with actual Bitcoin or Ethereum and in-game goodies like avatar skins and crafting tools. NFTs are proposed for Cubie Blueprints.

Because of blockchain technology, play-to-earn games are upending the economic paradigm of traditional online games. They blend the excitement of immersive video games with the chance to earn prizes for your time and attention. Users can benefit from play-to-earn crypto games, but most need initial investment and a learning curve. Your earnings will vary based on the game and your abilities.

Best Play to Earn Crypto Games That Will Make You Rich was originally published in BuyUcoin Talks on Medium, where people are continuing the conversation by highlighting and responding to this story.