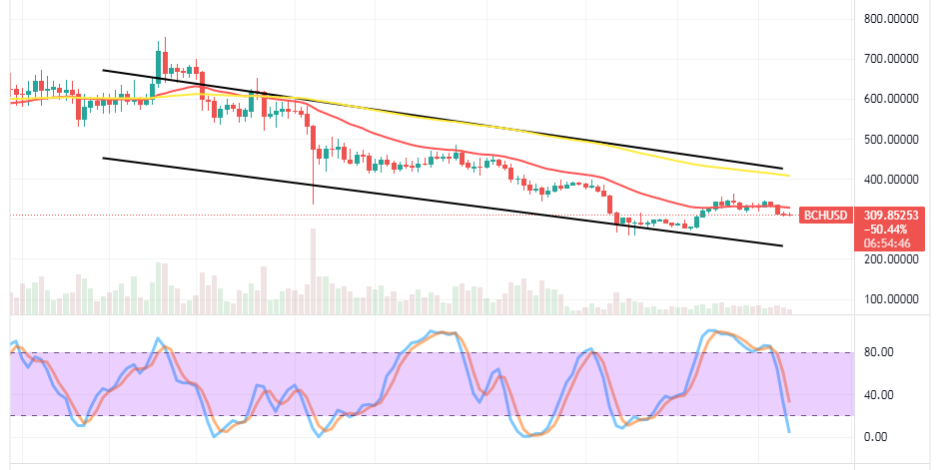 Trade Attempts Downsizing – February 19
It has been on the BCH/USD market financial operations that the crypto-economic trade attempts downsizing at a higher resistance path of the smaller SMA trend line. The percentage rate of the crypto market is at a negative of 0.23 as the price trades between $316 and $305.

Is there any trading sign suggesting the possibility of change from the bearish trend as the crypto trade attempts downsizing?

There has been no tangible trading sign suggesting the possibility of a direction change from the current bearish trend as the BCH/USD trade attempts downsizing more on a lighter from the trend line of the 14-day SMA. Buying position signal has not taken a form as there is still a need for some smaller-downs to play out closely toward the lower bearish channel trend line drawn before the crypto economy can support in the long run.

On the downside of the technical analysis, the BCH/USD market short-position placers have to solidify their stances against any price up-surging effort around the $300. The downward force bags low-active motion to the extent that joining the move appears difficult. Therefore, traders may stay off the market at this point for a while. But, investors may hold their portfolio and even endeavor to buy more while price dips more lowly.

In comparison, Bitcoin Cash’s trending capability against Bitcoin has continued to respond to a falling force beneath the trend lines of the SMAs. The 14-day SMA indicator is below the 50-day SMA indicator. The bearish trend line drew, affirming the intensity depth of the falling force. The Stochastic Oscillators have slightly moved down to continue moving in a consolidation manner within the overbought region. It appears that the base crypto tends not to have a stronger stance against the counter-trading crypto in the subsequent sessions.

68% of retail investor accounts lose money when trading CFDs with this provider.