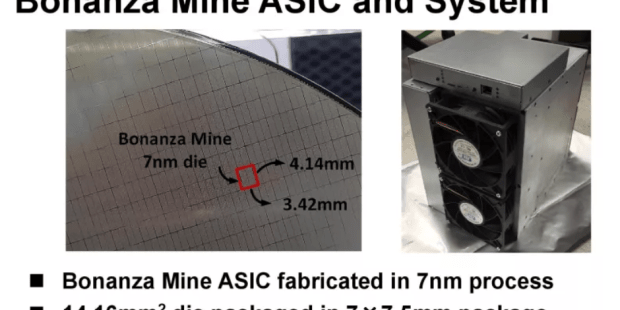 While a new chip is upcoming, Intel shared information about its past product exploration in bitcoin mining chip design.

Intel has shared details of its past explorations on bitcoin mining application-specific integrated circuits (ASICs) at ISSCC 2022, a global forum for presentation of advances in solid-state circuits and systems-on-a-chip, reported Tom’s Hardware.

Intel’s power-efficient chip, called Bonanza Mine, is fabricated in a 7nm process and bundled in lots of 300 to compose a full-fledged 3,600W bitcoin mining machine that can perform up to 40 terahashes per second (TH/s).

When news surfaced that Intel would give a presentation about a bitcoin mining ASIC at ISSCC, it seemed that it would present a new chip. However, an Intel representative later told Bitcoin Magazine that “the SHA-256 ASIC referred to in the paper being presented at ISSCC … was [a] first generation product exploration from 2018.”

On February 11, Intel officially announced its Bitcoin silicon program, highlighting that multiple large customers had secured their spot in the orders queue, including Block, the financial services firm previously known as Square, Argo Blockchain, and GRIID, which had already disclosed a purchasing agreement with Intel to the SEC for the new chip that was yet to be revealed.

Intel’s upcoming chip, the Bonanza Mine 2, will only be released later this year.

“The supply agreement released as part of required [U.S. Securities and Exchange Commission] SEC disclosures from our customer concerns the second-generation ASIC for which we will provide more details soon,” the Intel representative added.

However, Intel will leverage the innovations developed with its first-generation product exploration and shared at ISSCC in its upcoming Bonanza Mine 2 ASIC.

Indeed, the giant chipmaker will need to up its game if it’s second-generation chip is to be competitive with the likes of Bitmain, today’s market leader in the bitcoin mining industry. While Intel’s first-generation ASIC consumes 3,600W to output 40TH/s, per the report, Bitmain’s flagship miner needs only 3,010W to perform 140TH/s.