The Bitcoin Blocks With the Lowest Block Hash Value in History: Research 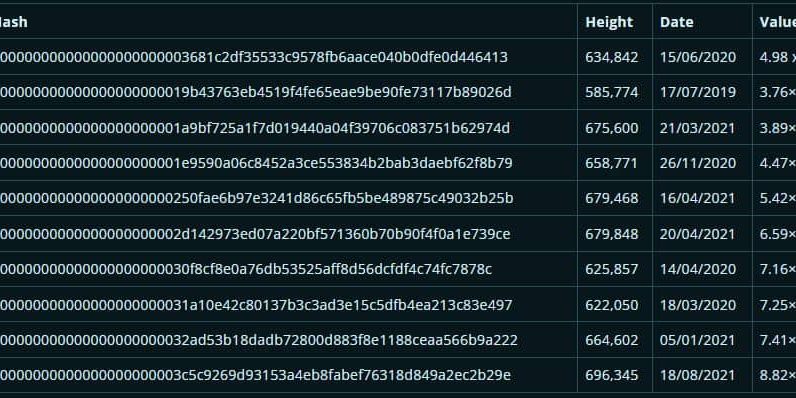 There are plenty of exciting things that happen within the Bitcoin network. All the programmed, pre-defined algorithms make it much like a living organism that adjusts and evolves based on current conditions.

In this article, we take a look at something that’s not heavily discussed all so commonly – the lowest block hash values in BTC’s history.

What is the Bitcoin Hash Value?

To begin, we would first need to clarify what is the hash value. Bitcoin functions based on a consensus algorithm that’s based on the proof-of-work model.

BitMEX Research puts forward a simple definition where the PoW consensus requires miners to attempt finding a block hash for each Bitcoin block with a low enough value to be considered valid.

This block hash value needs to be below the difficulty target, which in turn adjusts automatically once roughly every two weeks. This is done to ensure that the expected time one needs to wait for a Bitcoin block is about 10 minutes. It’s also worth noting that the BTC mining difficulty adjusts proportionally to the effort of spent across the entire network.

As mentioned above – the block hash value needs to be lower than the target value of the difficulty. As the research points out – in some cases, this could be substantially lower. In any case, though, the block is still valid.

The Blocks With Lowest Hash Value

BitMEX Research notes that the block hash values, in general, have been getting lower and lower as time passes by and the required difficulty increases.

This is in part because of the price appreciation and in part because mining machines become more and more efficient. The below table shows the 10 blocks with the lowest hash value in history:

Somewhat expectedly, these blocks were all mined in the span of the last few years. The block with the lowest ever hash value was produced on June 15th, 2020, and it was mined by the Binance Pool at block height 634,842. It’s interesting to note that this is the only Bitcoin block containing 23 leading zeros in its hexadecimal representation (what you typically see in block explorers) ever to be produced.