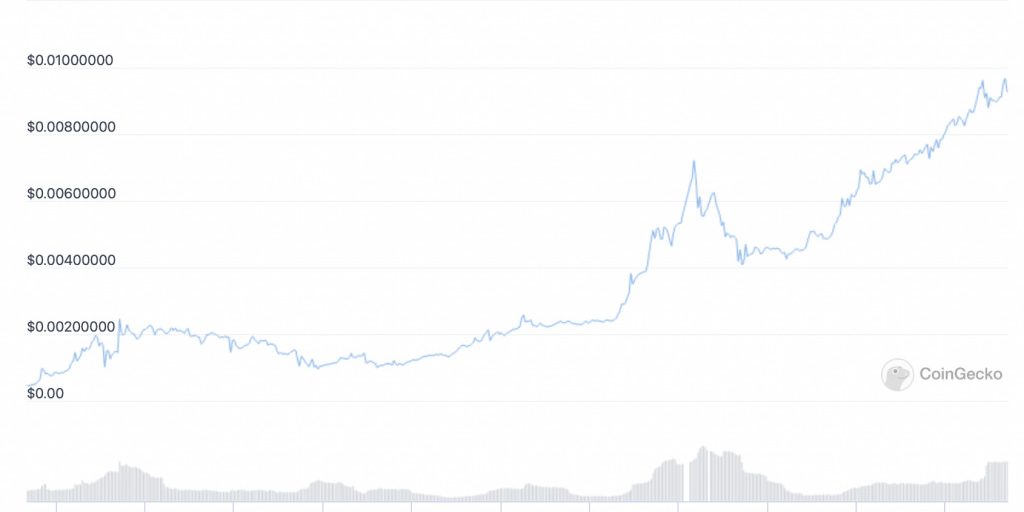 The cryptocurrency market has had a rough 24 hours, along with global stock markets. Its total cap stands at $1.96 billion, down by 4.6% in the past day. Most major coins have fallen along with, including bitcoin (BTC), ethereum (ETH) and solana (SOL). However, a sharp dip always creates the potential for a sharp rebound. As such, we’ve listed the 5 cryptocurrency to buy for a price boom this weekend. This covers coins with good short- and long-term potential.

5 Cryptocurrency to Buy for Price Boom This Weekend

LBLOCK recently set a new all-time high of $0.00974554, some 13 hours ago. This has been a recurring pattern all week, with the altcoin rising by roughly 2,000% since launching at the end of last month.

It’s hard to say where LBLOCK will stop, given it’s such a new crypto and may have plenty of room left to rise. It’s the native token of the Lucky Block lottery platform, which is based on Binance Smart Chain. It has now racked up 35,000 holders, with this number likely to be obsolete in the next few days, if not hours. Such growth has been driven largely by forthcoming release of the beta version of its app, which is due for full launch on March 21.

Many of you have been asking about the Beta Testing for the Lucky Block App and we have an important announcement to share.

The release of the beta testing version of the app will now take place on 07.03.2022. pic.twitter.com/P9bEVQkXhF

Starting from March 25th, Lucky Block will hold regular draws. Interested parties can enter by purchasing tickets using LBLOCK, with entrants having the chance to win 70% of each lottery’s jackpot fund. Meanwhile, 10% of each fund will be shared equally among all LBLOCK holders, regardless of whether they formally enter or not.

Make sure you join our telegram and be first to know about future announcements! 🔥

Currently, investors can trade LBLOCK on PancakeSwap and on the LBANK Exchange. Given that it’s growing strongly already, it’s likely that more listings will be added soon. This is why it’s one of our 5 cryptocurrency to buy for a price boom this weekend.

BTC’s technical indicators suggest that, contrary to the wisdom of crowds, now may be a good time to buy. Its relative strength index (in purple above) has dived almost to 20, indicating that it’s oversold. Likewise, its 30-day moving average (in red) is falling below its 200-day average (in blue). When it completes this move, it may signal a prime time to reenter.

While bitcoin has had a rough start to the year, analysts remain bullish for its prospects once the global macroeconomic situation stabilises. For instance, research firm FSInsight released an investor note at the start of this month predicting that it could end the year at $200,000. Similarly, Bloomberg analyst Mike McGlone has long held fast to his contention that it will reach $100,000 this year, driven by it increasingly being seen as digital version of gold.

$100,000 #Bitcoin, $50 #Oil, $2,000 #Gold? 2022 Outlook in 5 Charts – Peaking commodities and the declining yield on the Treasury long bond point to risks of reviving deflationary forces in 2022, with positive ramifications on Bitcoin and gold. pic.twitter.com/j3VNAOCwuz

It’s also worth pointing out that BTC now commands $62.4 billion in institutional investment, much more than any other coin. It continues to attract the most outside interest, and as the market’s leader, it will inevitably lead any significant recovery and new bull market.

NEO’s chart reveals that it’s picking up momentum after several months of decline. Its RSI shot up from 30 around a week ago, and remains around 60, suggesting continued strength. Its 30-day average has also recently overtaken its 200-day, indicating a new upwards trend.

NEO has been a neglected coin for too long, but not anymore. Its native platform, the layer-one blockchain Neo, has announced it’s partnering with China’s state-backed Blockchain Service Network. As a partner, it will provide infrastructure services to the BSN, which is planning to create its own permissioned chain called Jiuquan. This is massive news for Neo, with the partnership likely exposing it to new opportunities and customers.

🎉We are thrilled to announce that @Neo_Blockchain will be a framework provider on the BSN DDC!

🤔Guess which blockchain framework will be next? https://t.co/758UyNaY3w

Interestingly, NEO is one of the few coins that didn’t set a new all-time high in 2021, with current high of $198.38 set back in January 2018. This means it has plenty of room left to rise. This is why it’s one of our 5 cryptocurrency to buy for a price boom this weekend.

DOT’s RSI hit nearly rock bottom a couple of days ago, and remains low. At the same time, its 30-day average continues to flag below its 200-day. This all suggests it’s largely undersold right now, and due a big upwards correction in the not-too distant future.

It’s certainly odd that DOT has sunk so low in recent weeks, given how fundamentally strong it is. Its native platform, Polkadot, is one of the most promising layer-one blockchains in the sector. It has been hosting auctions for parachain slots on its main chain since the end of last year. These will decide which projects join Polkadot’s overall network, with the 9th such auction end a week ago.

HydraDX will be onboarded at block #9,388,800 [roughly March 11,2022] at the beginning of lease 7 with the other winners from auctions 6-11. Over 5.3K network stakeholders locked up DOT in favor! pic.twitter.com/x3wMkMDKA9

Once the parachains are up and running, Polkadot should become much busier. This means more DeFi activity and more demand for DOT. Indeed, certain analysts believe it could be one of the biggest coins of 2022. It’s certainly overdue a rally at some point, which is why it’s one of our 5 cryptocurrency to buy for a price boom.

However, ICP holds considerable promise as a discounted investment that could boom in the not-too distant future. This is largely because its native platform, the Internet Computer, is pursuing integrations with Bitcoin and Ethereum, respectively. This means that users of the Internet Computer will, once the integrations are complete, be able to execute Bitcoin and Ethereum transactions.

It also means that Bitcoin may end up having its own DeFi ecosystem. This is because Internet Computer smart contracts will be able to transact in bitcoin, with these contracts be usable by DeFi protocols. While this is still some ways off, it’s likely that once the market catches wind of this development, ICP could rally considerably.