The Popularity Of Retail Bitcoin Mining Is Surging 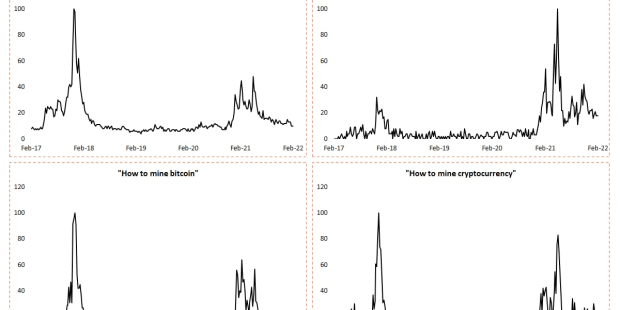 Despite the bitcoin price remaining far from its all-time high, social data demonstrates that retail interest in mining bitcoin is surging.

Some social data suggests that bitcoin mining is more popular than ever among retail participants as a surge in interest that started early last year continues, despite a market downtrend.

Bitcoin is currently trading roughly 50% lower than its latest all-time high of around $69,000, set in early November 2021. But even with bitcoin’s steady price decline over the past few months, certain online communities are buzzing with novice and seasoned miners alike discussing best practices, new products and educational resources for successful mining. Sustained activity and growth in these communities, despite a market downturn, suggests that widespread interest in mining relative to previous years is insulated from the bitcoin market’s characteristic volatility.

Before discussing the data though, it’s interesting to note that one of the Bitcoin community’s favorite sentiment datasets doesn’t reflect this trend. Google search interest is a favorite tool for gauging mainstream interest in all sorts of Bitcoin- and cryptocurrency-related activities and investments. The basic reasoning behind inferring general interest from this data holds that when more people are interested in Bitcoin, search levels for certain terms and phrases will increase. And when interest and activity taper off, search rankings will also decline.

But search data for several simple and common mining-related terms and phrases show low or declining interest levels. The below charts visualize this data for mining-related searches:

Where The Mining Boon Is Happening

Twitter is often recognized as the leading social media platform for public cryptocurrency conversations, but for miners — especially novices looking for answers to their questions — Reddit is king. So, forget Google as a measure of mining interest because miners are flocking to Reddit forums to talk with their novice peers or learn from seasoned professionals.

Reddit users have created a variety of cryptocurrency mining-focused subreddits. A few of these communities boast tens of thousands of members, and growth across nearly all of them has been parabolic for over a year. Other metrics like the volume of daily posts and comments as well as subscriber activity rankings add to the growth seen in raw subscriber counts and signal healthy community growth, not just swarms of new members boosting the size of these forums.

The below charts visualize some of the data showing growth in Reddit mining communities.

Bitcoin mining’s subreddit rocketed from 40,000 subscribers to more than 80,000 by the end of 2021 and continues to climb through February. Before January 2021, that same subreddit took more than three years to double its subscriber count.

Other general cryptocurrency subreddits shown above also saw near-vertical growth curves in subscriber counts. The attraction to mining alternate cryptocurrencies, especially for new, small-scale miners, can often be explained by an interest in betting on higher profitability from smaller protocols and lower financial barriers to entry with hardware and other materials.

The Popularity Of Self-Mining

What type of mining are these communities interested in? Activity levels are high across Bitcoin mining and alternate cryptocurrency mining forums. But for all types of miners, the desire to self-mine with complete control of the operation is strong. The types of questions being asked in the forums signal this interest: The forums are filled with users discussing basic electrical questions, hardware comparisons and more. New miners are also asking about best practices for ventilation in different climates, noise and heat insulation tricks, revenue calculations and dealing with bricked control boards. Experienced miners, mining companies and other novice miners are all offering advice, educational resources and tips and tricks for successful mining. While some miners prefer to use hands-off hosted services like Wattum Management, Compass Mining, Blockware Solutions and others, the small-scale, self-mining operation is the main attraction for members of these mining communities.

All the mining fun isn’t only on Reddit though. Twitter conversations about mining news, products and educational resources have also grown considerably. Quantifying this growth is difficult though, since Twitter conversation and interaction data isn’t available as easily as Reddit data. But the growing crowds of miners on Twitter regularly post photos and videos of their setups, sharing advice on how they optimized their mining operations. A pair of active, pseudonymous Twitter users that use the nyms Diverter and Econoalchemist have also created powerful libraries of educational articles, threads and interviews targeting retail audiences that want to mine their own bitcoin.

There is no uniform or comprehensive instruction manual for how to mine at home, but dozens of other miners have followed the lead of these two creators, publishing their own educational content to help other would-be miners. Shared across Reddit, Twitter, YouTube and other platforms, this growing canon of content has played no small part in creating an army of retail miners.

The Future Of Retail Mining

What prompted a rush from retail into bitcoin mining is an open question with many possible answers. For one thing, mining profitability soared throughout 2021 as Chinese miners were forced offline, causing a massive shuffle in hash rate between mining pools and leaving money on the table for new miners, both retail and institutional.

For another, retail mining’s growth may be a reaction to the ongoing rapid industrialization and institutionalization of mining. In 2021, institutional mining certainly came to the fore of the Bitcoin market with a surge of mining companies going public (e.g., Rhodium, Core Scientific, Greenidge), a bevy of new financial products and services created for large-scale miners from companies like Galaxy Digital and NYDIG, and even a mining council being created to form a unified voice for corporate mining companies that might be targeted by regulators and lawmakers.

Possibly out of a refusal to forever accept mining as something for the “suits,” small-scale miners crowded internet forums and fueled a red-hot mining market for themselves. But whatever caused the mining craze, the online communities growing around it aren’t shrinking at all. Just the opposite, even as bitcoin sits well below last year’s all-time high, online mining communities are thriving, with growth and activity as strong as ever.

This is a guest post by Zack Voell. Opinions expressed are entirely their own and do not necessarily reflect those of BTC Inc or Bitcoin Magazine.