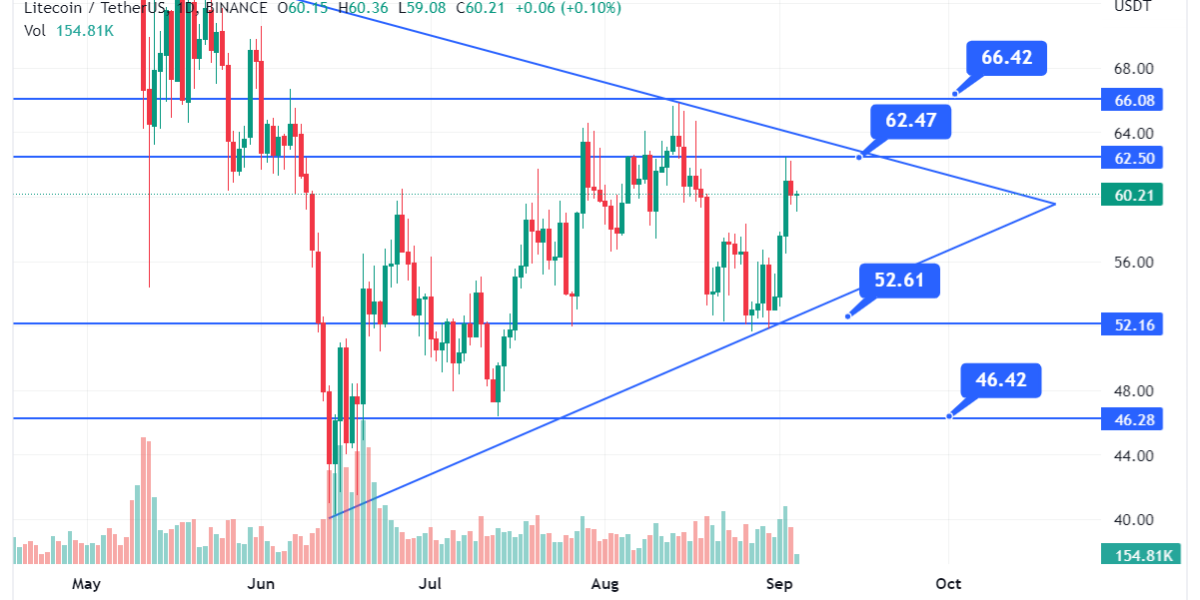 Litecoin scores 14%, extending previous gains amid the Evening Standard report on a list of the top five altcoins. It’s intriguing because it demonstrates how valuable the blockchain is, as Litecoin appears on the list. A few cryptocurrencies on the list could be considered competitors to Bitcoin.

According to the report, these alternative cryptocurrencies can be used as investment vehicles or to diversify investment portfolios. For instance, Litecoin, traditionally regarded as the underdog, outperformed other market participants last week.

The Evening Standard named Litecoin one of the top five altcoins, and on September 1st, the official Litecoin Twitter page reposted this article. As its ranking for popular terms has risen significantly, so has Litecoin’s social media presence. It increased investor confidence in the currency, causing LTC prices to rise.

Litecoin Blockchain Must Record All Transactions

The official Litecoin Twitter account tweeted a post on September 2nd. According to the post, every Litecoin transaction must be recorded on the Litecoin blockchain to be considered successful and valid. Miners are rewarded for completing these transactions and contributing to the network’s power.

Furthermore, the average transaction price for Litecoin is less than one penny. This post also benefited LTC/USD because the popularity of Litecoin as a payment method drives its price. LTC’s reserve risk also decreased, allowing investors to buy as the risk-to-reward ratio increased. For investors, it was a fascinating trend. It demonstrates that developers are interested in and working to improve the blockchain, a positive indicator for cryptocurrencies.

Litecoin’s development resulted in the creation of cutting-edge technology such as Atomic Swaps for cross-blockchain trustless trade and Lightning for instantaneous global fund settlement. It suggests that the price of LTC/USD may soon rise. Furthermore, various on-chain measures contributed to Litecoin’s improved performance.

LTC’s price and Market Value Realized Value (MVRV) ratio increased dramatically. Furthermore, the high volume aided the price increase of LTC/USD. It’s worth noting that the number of receiving addresses has grown over the last week. It was encouraging for LTC because it demonstrated that investors believed in the token. It also suggested that the currency was gaining support from the community. As a result, the price of LTC/USD increased as investor confidence in Litecoin grew.

Litecoin (LTC) was trading higher on Sunday, extending previous gains. The LTC/USD pair reached a high of $60.36 earlier today, pushing away from a low of $59.08, which marked the token’s two-month low. Prices have risen in consecutive sessions since then, with today’s spike bringing them near a crucial resistance level.

As Litecoin reached its $62.00 barrier, price volatility seemed assured, with bulls protecting profits rather than sustaining their holdings. As a result, LTC is presently trading at $60.40, more than $2.00 lower than today’s prior top. One explanation is that the RSI has hit a stumbling block in the shape of a resistance level at 47.25. If LTC bulls want to go higher, they must clear this barrier.

Let’s keep an eye on $62.50 as the double top pattern will likely keep LTC bearish, whereas a bullish breakout can extend further uptrend until $66.10. Good luck!