Research: Bitcoin’s realized price shows a bottom could be forming 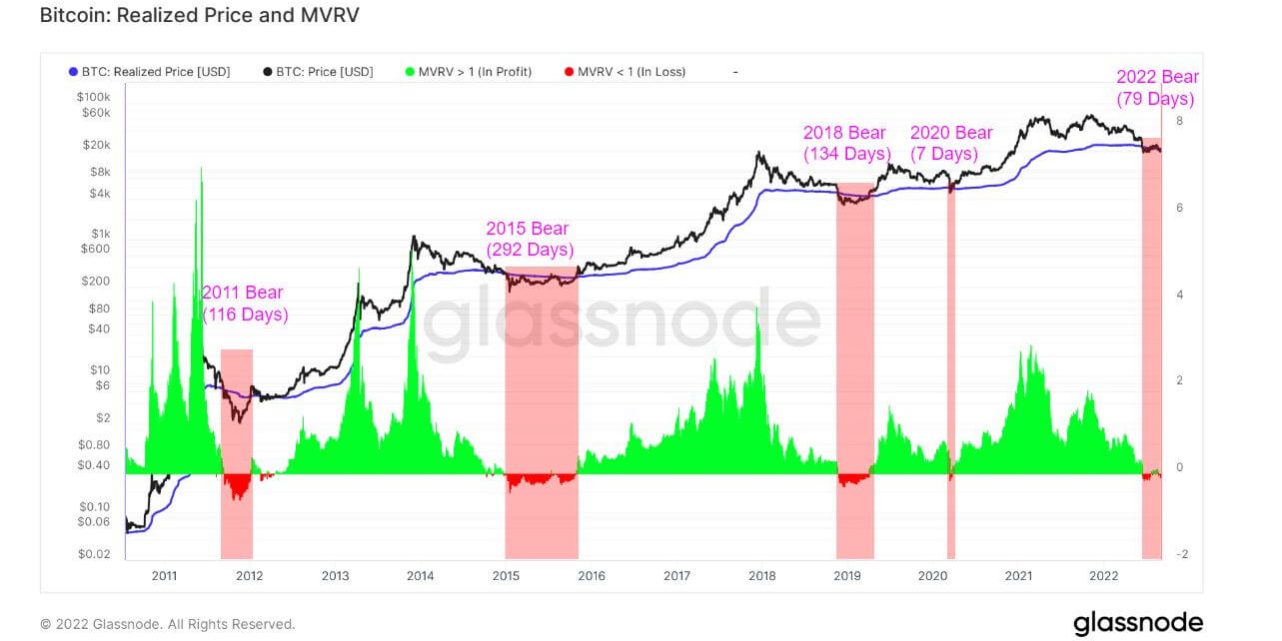 Determining a market bottom requires looking at various different sets of data. However, when it comes to Bitcoin, there are two frequently used on-chain metrics that have historically acted as solid indicators of its price bottom — realized price and the MVRV ratio.

Realized price calculates the average price of the Bitcoin supply valued at the day each coin last transacted on-chain. Realized price is an essential metric and is considered to be the cost-basis of the market. The MVRV ratio is the ratio between the market capitalization of Bitcoin’s supply and its realized value. The ratio is a solid indicator of whether Bitcoin’s current price stands above or below “fair value” and is used to assess market profitability.

Each time Bitcoin’s spot price trades below the realized price, the MVRV ratio will fall below 1. This shows that investors are holding coins below their cost basis and carrying an unrealized loss.

A consistent MVRV ratio shows where support is being formed and, when combined with further analysis of the realized price, can signal a market bottom.

All of Bitcoin’s previous bear market cycles have seen prices fall below the 200-week moving average realized price. Since 2011, the average stint below the realized price lasted for 180 days, with the only exception being March 2020, where the dip lasted only 7 days.

What it does signal is strong resistance forming at the $20,000 levels. This resistance is what ultimately determines the strength of the market and the potential low it could drop to in a future bear cycle.

According to data from Glassnode, Bitcoin has seen its relative unrealized loss jump significantly in August, following a similarly sharp spike at the beginning of the summer. Relative unrealized loss shows how much value coins whose price at realization was higher than the current price lost. A rising unrealized loss score shows that addresses continue to hold their coins despite their relative devaluation and aren’t selling them at a loss.

Looking at historical data shows that every time the unrealized relative loss spiked, Bitcoin posted a higher low. In every following market cycle, Bitcoin attempted to retest the high it reached before the bear market but almost always failed to beat it. It took at least two years before Bitcoin’s price reached the high of the previous market cycle.

Looking at the data shows that there’s a high chance a bottom could be forming. And while this indicates an upward price movement in the coming months, it could still be another two years before the market recovers in full and enters into a full-blown bull run.

The post Research: Bitcoin’s realized price shows a bottom could be forming appeared first on CryptoSlate.