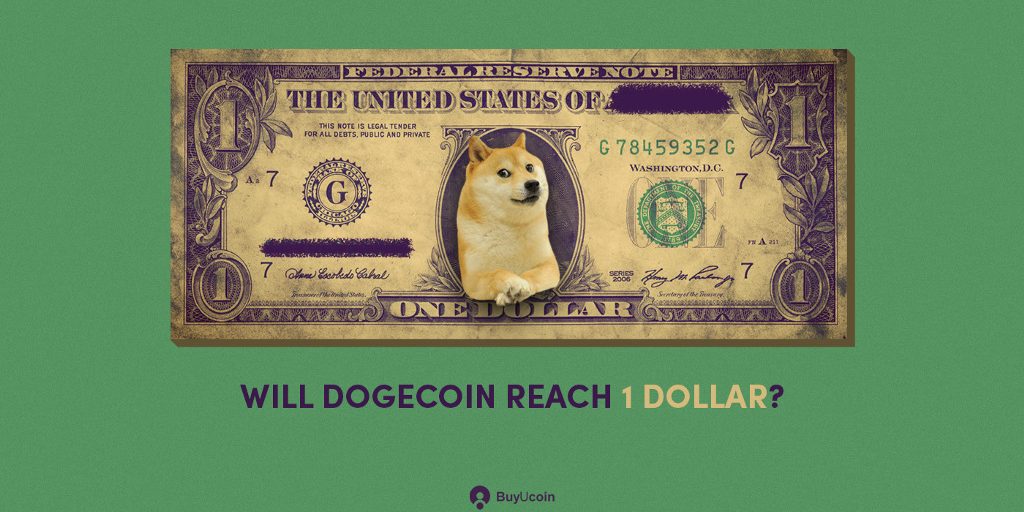 With the exception of a rocky start in 2022, cryptocurrencies have been a terrific asset class to purchase in recent years. The market’s total worth has risen from around $18.5 billion in February 2017 to a stunning $2 trillion today.

In digital assets, retail traders have taken to the dog-inspired Dogecoin (DOGE). With a market worth of almost $20 billion, it is presently the world’s 11th most valuable cryptocurrency. Over the last five years, DOGE, the native token, has recovered an astounding 72,000 per cent. This is despite the fact that its price has dropped by 77% in the previous nine months. BuyUcoin Offers the best price to buy dogecoin in India.

Can Dogecoin make it to $1? This is a question posed by investors and dogecoin holders. We will learn everything there is to know about Dogecoin and how to estimate its price in this blog.

What is Dogecoin (DOGE)?

On the internet, the coin quickly became synonymous with the Shiba Inu meme dog. This dog was great for spreading memes, jokes, and other content. This is why Dogecoin was regarded as a simple coin to spread memes and introduce a broader audience to the cryptocurrency industry rather than a digital asset that gave dramatically new solutions to the market.

Dogecoin differs from other virtual currencies in a few ways. We’ll go through the distinctions between it and Bitcoin (BTC) to compare. This should help you answer the question, “Will Dogecoin ever hit $1?”

The first thing we should examine is the supply limit. As we all know, Bitcoin has a total supply of 21 million BTC. Being digitally rare is one of BTC’s primary selling advantages. Dogecoin, on the other hand, does not have a supply limit. It is crucial to know the answer to the question, “Will Dogecoin Reach $1?” If Dogecoin has an endless supply, it may be hard to reach sky-high valuations like other digital currencies.

Every year, the number of coins grows by 5 billion. This makes it extremely difficult for DOGE to achieve extremely high values.

Dogecoin and Elon Musk — The Saga

Elon Musk has had a significant effect on the cryptocurrency industry, particularly on Dogecoin. Tesla CEO and entrepreneur Elon Musk has spoken about Dogecoin several times and has even advocated for virtual currency.

He has been tweeting a lot about Dogecoin in recent months, and practically all of his interventions have had an effect on the price of Dogecoin. Musk, for example, tweeted in December 2020:

This has resulted in over 11k comments and 221.9 likes. DOGE then rose by more than 20%, launching one of the greatest bull runs in history. DOGE holders were already advocating for the “send it to $1” campaign at the moment.

Simultaneously, he modified his Twitter biography to “Former CEO of Dogecoin,” referring to the time when he claimed for a few hours that he was the CEO of this virtual currency. All of these factors make it possible for Dogecoin’s value to climb and investors to profit quickly if they can enter the market as soon as Musk speaks favourably about DOGE.

These remarks were only the fuel for DOGE’s bull run, which saw it reach an all-time high near $0.70. Even now, the tendency is continuing. If Musk makes a nice statement on Dogecoin, the price should rise. It remains to be seen whether it will hit $1.

“Will Dogecoin ever hit $1?” This is the main topic of this post, and we will try to address it. One thing is certain: in the bitcoin market, everything is possible. However, we must confess that nobody could have expected what has transpired with DOGE in recent months.

Indeed, the current market scenario could only be explained by FOMO and how the market reacted to various stimuli, mostly from Elon Musk but also from other persons in the crypto field. Check Latest DOGE TO INR PRICE

However, the answer to the question “Will Dogecoin ever hit a dollar?” is unclear. It is possible, but it is also possible that it will not occur. It is determined by a variety of circumstances, including the market conditions that emerge. This is why we should always watch how Dogecoin is going and the triggers that might push the virtual currency’s price not just to its all-time high but even higher, beyond $1 per coin.

Furthermore, in order for DOGE to continue rising, there should be a large number of purchasers. This has already occurred during the virtual currency’s first bullish wave. However, attracting a second significant number of purchasers may become more difficult in the future, owing to the fact that DOGE is not a currency to be held but rather a coin to be traded.

Will Dogecoin Ever Reach 1 Dollar Mark — Possibility Vs Probability

Will Dogecoin ever hit $1? Of course, it can, but wise investing is more concerned with what is likely to occur than what is possible. The goal is to determine whether the coin has a decent chance of reaching $1 within a reasonable amount of time unless you’re purchasing a few Dogecoins purely as a throwaway lottery ticket.

Mathematically speaking, $1 might not be as close as you believe. Dogecoin did briefly reach $0.73 on May 6, 2021, but that was at the height of the meme-trade frenzy. It can’t be a coincidence that the rise and fall of the meme craze and Dogecoin’s meteoric surge and subsequent drop are related.

Investors shouldn’t bet on retail renegades driving Dogecoin back toward $1 now that the novelty of the meme transaction has worn off. Given that Dogecoin has lately traded for less than a dime, they probably wouldn’t get another chance to try if they weren’t successful the first time.

It remains to be seen whether Dogecoin will ever hit $1. If the bull run continues and DOGE follows the trend, it is quite likely that it will reach this price level. However, if the market enters a bear market in the near future, we may see this happen (at least in the near future).

All crypto, not just Dogecoin, aspire to become the backbone of the financial industry in the next decade, which makes it highly likely that with the passage of time and in the not-too-distant future, many cryptos will become major forms of payment in the digital finance world, resulting in one or more price increases for this coin and its worth in the world.

Since this is the case, it is safe to predict that Dogecoin’s price and value will continue to rise in the future. Since cryptocurrency has become a cornerstone, and coins such as meme coins have become a big element of cryptocurrency, investors must comprehend everything there is to know about tokens such as Dogecoin. This will also assist in shaping the financial industry’s future.

For such deep insights, safe trading, and investments in cryptos, visit BuyUcoin today and start investing!

Will Dogecoin Reach $1? DOGE Coin Price Prediction 2022 was originally published in BuyUcoin Talks on Medium, where people are continuing the conversation by highlighting and responding to this story.